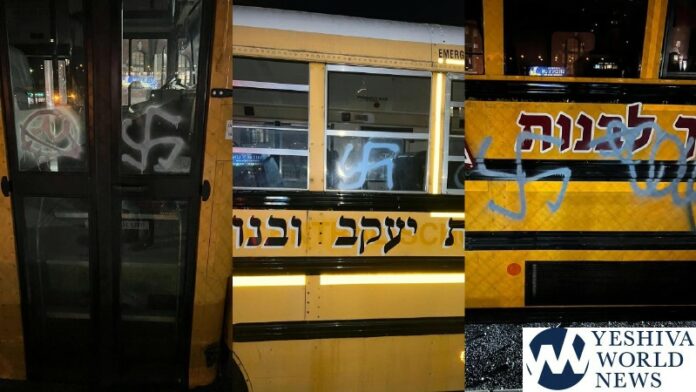 Frum Jews in Williamsburg were the victim of yet another hate crime on Sunday when a suspect spray-painted swastikas on multiple school buses at Division Avenue and Rodney Street.

The incident comes just a day after multiple chasidim were victimized in unprovoked attacks over Shabbos.

The NYPD’s 90th Precinct, Hate Crimes Task Force, and Williamsburg Shomrim are investigating the incident and seeking to identify the suspect in this case.

“I am angry & heartbroken by two more anti-Semitic, violent incidents in our community over Shabbos,” Councilman Lincoln Restler wrote on Twitter. “A man was violently struck upside the head in Bed Stuy by Marcy & Myrtle. Swastikas & other graffiti were spray painted on yeshiva school bus in Williamsburg by Division & Rodney.”

The ADL wrote on Twitter “We are horrified that yeshiva school buses clearly marked in Yiddish could be vandalized in such a way with hateful symbols, especially on the same day that we found two Jewish men to have been assaulted in the area. NY must be a safe heaven for all and this hate must stop!