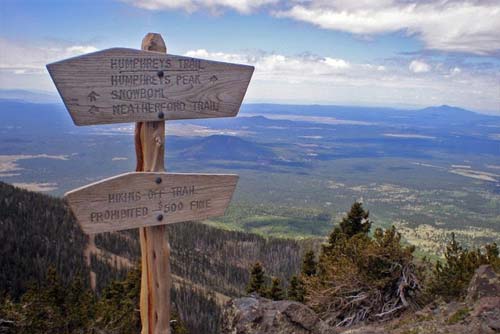 A New York City man needed to be rescued twice on consecutive days while hiking in a northern Arizona mountain range, authorities said.

The 28-year-old Brooklyn man first called 911 on Wednesday at about 7 p.m. to say he got lost while hiking on Humphreys Trail in the San Francisco Peaks north of Flagstaff, Coconino County Sheriff’s officials said.

The trail runs through some 5.5 miles (8.9 kilometers) of steep, rocky terrain between the Arizona Snowbowl ski resort and Humphreys Peak, the state’s highest point with an elevation of 12,633 feet (3,851 meters).

Snowcat vehicles from the ski resort drove the man off the mountain and he declined medical attention.

But at 5 p.m. the next day, the hiker called 911 to say he needed help after injuring himself in a fall near a ridge on the Humphreys Trail.

An Arizona Department of Public Safety rescue helicopter was sent to pick up the man and another hiker who had stopped to help him.

The man, who was not identified, was “provided with preventative search and rescue education about the conditions on the trail and the approaching winter storm and encouraged to not attempt the hike again,” sheriff’s officials said in a statement.