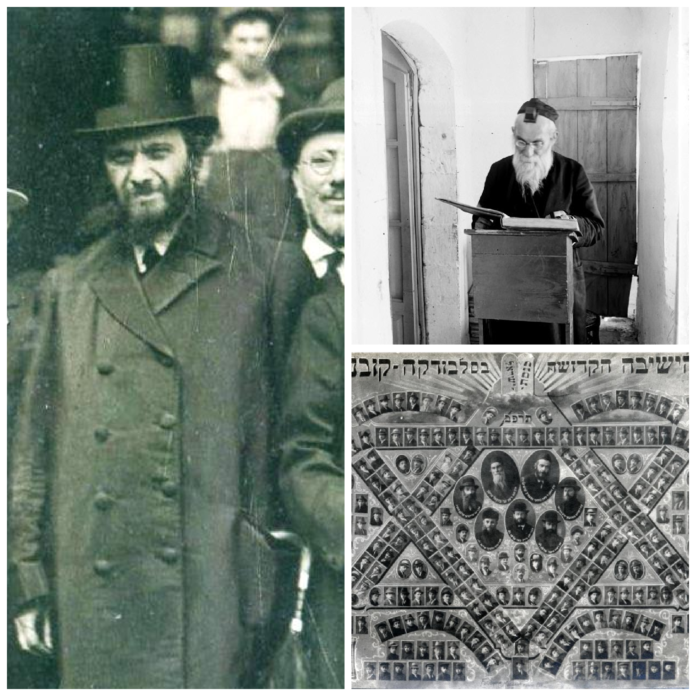 Yes, newspapers with headlines of Russians taking over Ukraine.  But this article is not referencing Putin and Zelensky in 2022.  Rather, we are discussing 1919, and the Slabodka Yeshiva’s time in exile in the Ukrainian city of Kremenchug.

But let’s go back to the Yeshiva’s formative years in Kovno – or rather a suburb of it in Slabodka.

1882, was the year that two things happened in in the surroundings of Kovno.  The first thing that happened was that Alter of Slabodka, Rav Nosson Tzvi Finkel, had founded the Slabodka Yeshiva, wherein the study of Mussar became a prime focus. The second thing that happened was that construction began on the Kovno system of batteries and fortresses that was ordered by decree of Tsar Alexander II – three years earlier on July 7th, 1879.

A fort is where the soldiers are housed and kept.  A battery is where they keep the cannons.  Eventually, the fort at Kovno was to have 9 circles of forts and batteries.  The later ones were constructed out of concrete – not brick.  Kovno had been part of Russia since 1795, when Tsarina Catherina and the other states of Europe had swallowed it up and caused Poland and Lithuania to disappear for the next 123 years.

True, Poland/Lithuania had rebelled against Russia a couple times – between 1830 and 1831 and then again in 1863. But, these rebellions were put down and the

Kovno and its suburb Slabodka, were in the westernmost part of  Tsarist Russia.  Kovno was also located where the two rivers, the Neman and Neris rivers, merged together.  On account of both of these factors, this was the city most likely to be attacked by Germany and Austro-Hungary in the event of war.

That year, in 1882, the Jewish residents of Slabodka did not realize that the construction of the Kovno forts and batteries would eventually lead to disaster.  It would cause paranoid Tsarist Russia to force the Jews out of Slabodka and Kovno into exile in the first world war.  It would lead them through a harrowing experience of wandering in exile, being jailed both by the Russians and the Germans, and r”l many deaths.

But for those first 33 years, the Yeshiva in Slabodka accomplished the near impossible. It revitalized the Torh world, took the place of Volozhin as one of the leading Yeshivos in Europe.  Opened up branches and influenced the other Yeshivos in Lita to introduce a Mussar curriculum.

The Yeshiva’s general schedule was as follows:

On Shabbos, during Bain HaShmashos there was a period of time set aside form Cheshbon HaNefesh on the entire week that had passed.

In the summer of 1914, war was to erupt.  On July 28th, Austria-Hungary declared war on Serbia because of the assassination of Arch Duke Franz Ferdinand one month earlier. Russia came to Serbia’s defense and by the 4th of August,  Germany, France and Britain, along with their respective colonial empires entered the war. In November, the Ottoman Empire, Germany and Austria formed the Central Powers.  in April of 1915, Italy, Britain, France, Russia and Serbia formed the Allied Powers.

As bizarre as it may sound, Kaiser Wilhelm and Tsar Nicholas II, who were battling each other fiercely, were both grandsons of Queen Victoria of England (married to a granddaughter in the case of Nicholas II).  They had sent letters to each other, each claiming their desire to avert war.  But it was not to be.  A war that would kill 11 million people began a day later.

The Russian military authorities decided that the Jews were untrustworthy and could not reside next to the Kovno fortress.  They were forced into exile. Worse yet, many of the Yeshivas students and Rebbeim were drafted into the Tsarist Russian army.

The Yeshiva and its students scattered all over.  At this time, the Alter of Slabodka was seeking treatment in Germany for a medical ailment.  He was soon captured and jailed as an enemy alien by Germany on account of his being a citizen of Russia. A young fifteen year old Rav Shach was the last one out of the Yeshiva building, not knowing where to go.  Rav Dovid Leibowitz, one of the Alter’s leading talmidim took a position as the Rav of Šalčininka for the next six years, succeeding his father-in-law. Rav Moshe Mordechai Epstein, the Rosh Yeshiva, managed to relocate to the city of Rezekne in Eastern Latvia.  Rezekne was located some 194 miles northeast of Kovno.

While in Rezekne, Rav Moshe Mordechai made every effort to reconvene the Yeshiva. He needed to raise vast sums of money to get the students and Rebbeim released.  He sent letters and telegrams. After consulting with the other members of the Yeshiva’s administration, Rav Moshe Mordechai Epstein decided to relocate the Yeshiva to Minsk about 170 miles from Kovno, and further into Russia.

Why was Minsk chosen?  It was one train ride away and many of the students either lived there or had found shelter there. Minsk had an established Torah community and would welcome the Yeshiva.  Also, most of those whom Rav Moshe Mordechai had contacted expressed the desire to relocate there.

The relative calmness, however, did not last.   Minsk was to become the frontline, once again of the battle between Russia and Germany.  And Germany was using poison gas.

The Yeshiva administration decided to split the Yeshiva in two.  One part, including the Alter, Rav Moshe Mordechai, and Rav Avrohom Grodinsky  went to Kremenchug in the Poltava Province, about 418 miles south from Minsk, and a little more to the east.

The other part, which constituted over 150 of the Yeshiva’s students, including Rav Yitzchok Isaac Sher, the Alter’s son-in-law,  and Rav Dov Tzvi Heller, was to remain in Minsk.  Soon, however, those that remained in Minsk had to evacuate as well, and joined with the other part in Kremenchug.

Most of the Jewish residents of Kremenchug at the time were devout Chabad Chassidim.   They had heard of the famed Yeshiva in Slabodka and went out to greet them when they heard of their arrival.  Imagine their shock.

Chabad people, generally, do not shave their beards.  With few exceptions, Slabodka talmidim did.  It was part of the Alter’s philosophy of Gadlus haAdam.  Slabodka Talmidim also dressed in straw hats and fashionable suits and ties.  Eventually, however, the townspeople of Kremenchug acclimated quickly after seeing and conversing with the Rosh Yeshiva, Rav Moshe Mordechai Epstein.

Rav Yaakov Ruderman zt”l, the future Rosh Yeshiva of Yeshiva Ner Yisroel in Baltimore, recalled this most dangerous time in his life in the introduction to the Avodas HaLevi.  In Kremenchug, Rav Ruderman was kidnapped by a band of lowlifes at gunpoint.  They demanded the sun of 10,000 rubles or they would take his life.  He was taken to the home of the Rosh Yeshiva, Rav Moshe Mordechai Epstein, who did not have ant money with him.  As they were taking him out to kill him.  Rav Epstein ran out and began yelling and screaming to draw a crowd.  The ruffians turned to shoot but saw that their case was hopeless as a significant crowd had gathered.  Rav Ruderman was released unharmed.

Another time, Rav Moshe Mordechai was arrested on false charges, but got released miraculously as well.

Soon, however, the Russian Bolsheviks had taken over the Ukraine completely. At the end of 1919, the Bolsheviks had consolidated their rule.  By early 1920, the Yeshiva’s administration looked to get out of Kremenchug.  But it was too late.  All corridors had closed and there was no legal way out.

However, a miracle ensued.  In the aftermath of Lithuania declaring independence in 1918, the Bolsheviks signed a repatriation agreement with the now independent Lithuania in February of 1920.  They also provided two railway cars from Kremenchug for the Yeshiva in the summer of 1920.  Approximately 100 yeshiva students and staff entered these cars toward Vilna.

From Vilna, the Yeshiva then travelled back to Slabodka, arriving in September of 1920.  There were dramatic changes.  Slabodka and Kovno are no longer under Russia, but under the New Republic of Lithuania.  The town of Kovno had switched completely from old-style Lita to German Orthodoxy – Torah im Derech Eretz.  Imagine Bnei Brak chadarim becoming, in essence – German-Jewish schools.

The building, as well, was not empty.  To the surprise of the talmidim and hanhallah, another Yeshiva was present.  It was established during the German occupation by Rabbi Boruch Hurwitz and Rabbi Nisan Yablonsky.  Rav Yeruchem Levovitz also joined up with this yeshiva as a mashgiach – with the intent to save it for the return of the Alter’s Yeshiva.

The yeshivos merged together, but the original Slabodka Yeshiva remained at the helm. Now there were many more Talmidim.  Rav Yeruchem went back to Mir.  The Yeshiva had a wide range of students now, of all different ages.

The Alter quickly went to work.  He sub-divided it all into 4 institutions.  The Talmud Torah for young children was called, “Yesod Yisroel”, where a young Rav Elya Svei and a young Rav Henach Leibowitz would learn and play.  The Yeshiva Ketana was called “Ohr Yisroel” and was housed in the Butcher’s Bais Medrash. The Yeshiva Gedolah was called “Knesses Yisroel.” And the newly formed Kollel was called, “Bais Yisroel” – wherein leading Gedolei Torah learned. All four institutions, of course, were named after Rav Yisroel Salanter, the founder of the Mussar Movement.