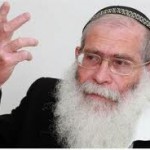 In light of the growing dispute over accepting funds from the International Fellowship of Christians and Jews, HaGaon HaRav Elyakim Levanon of Elon Moreh speaks out.

Rav Levanon, who is also Chief Rabbi of the Shomron Regional Council, feels “In recent years there has been disillusionment regarding Christianity. Everyone realizes that the State of Israel is a fact and it cannot be eradicated. There are also new developments among Christians who have embarked on a new path and this entails joining the central forces in the State of Israel, and to take action to strengthen their partnership with the Christian world. This process is hoped with pave a change in the State of Israel.”

The rav continues with a warning for he feels “their goal is to make the State of Israel dependent on the Christian world, and at the end of the day, it will present an opportunity for Christian control to bring ‘the savior’ and permit that individual to once again rule.

“The goal of the Christian foundation is obviously to create a dependency of the State of Israel on the Christian world. Summer camps provide a wide opening towards achieving this”.

The rav stresses he is not talking about Christian indoctrination in camps, but a far broader plan leading to eventual control. Hence he feels officials must come to this realization immediately and especially regarding the education system, which mustn’t become dependent on foreign powers.