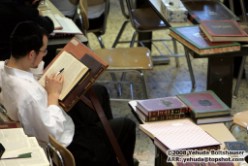 The Times Herald Record reports: With a building permit almost in hand, Yeshiva Toras Chemed is set to begin work on a 24,000-square-foot building and a 9,000-square-foot dormitory that will become the largest non-Satmar Orthodox Jewish school for boys in Orange County.

The project, which took nearly three years to get approval, will usher in a tradition of non-denominational Jewish orthodox scholarship that traces its roots to a great hero of the Holocaust. According to officials of the Yeshiva of Nitra in Mount Kisco, the yeshiva to be built at the former Inn at Chester on Route 17M will be the first American offshoot of the Mount Kisco school founded in 1947 by Rabbi Michael Ber Weissmandl and his brother-in-law Rabbi Sholom Moshe Ungar.

Weissmandl played a pivotal role in bringing awareness to Hitler’s concentration camps. He helped free many high-profile Jews, including the Grand Rebbe Joel Teitelbaum, the founder of today’s Satmar Jews, many of whom live in the Village of Kiryas Joel in Monroe. After the war, he came to the United States, where he and Ungar re-established the yeshiva that existed in the city of Nitra, then a part of Czechoslovakia. Weissmandl studied and taught there.

Descendants of Weissmandl will continue to run operations at Mount Kisco, while the family of Rabbi Ungar will be running the school at Chester, said Herschel Reich, the administrator of the Mount Kisco school.

The site plan for the Chester school has been approved but a building permit has yet to be issued, said Joe Mlcoch, building inspector for the Town of Chester. The school, on 17 acres, will have two dormitories, including a renovated existing building that served as the former motel.

“They’re getting very close,” Mlcoch said of the building permit.

Plans for the yeshiva got off to a rocky start in 2005, when the school used illegally built portable buildings set up as temporary classrooms. Town residents also have complained about a lack of supervision of the 60 or so students at the temporary school, as they roam the streets and pry into neighbor’s yards during breaks.

Officials of the school have said such disturbances would end once the school is built. And like the Yeshiva of Nitra, the yeshiva at Chester prides itself on focusing on religious education without ties to any Hasidic sect.

“We are not politically inclined with any movement,” Reich said. “If someone likes to be neutral, then they would come here.”