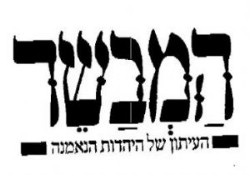 As a result of a complaint filed with his office, State Comptroller Micha Lindenstrauss has launched a clandestine investigation into the new chareidi newspaper HaMevaser, a project of Meir Porush. According to allegations, the project of launching the new newspaper may be the result of unauthorized involvement of government since opponents of the paper explain Porush, a MK, turned to potential advertisers asking them to support the paper, which they explain represents his unauthorized or possibly illegal acceptance of favors and accepting bribes or abusing his political influence.

The investigation was launched on Sunday, and investigators seem to be conducting the probe under a veil of secrecy, obtaining statements from people who received letters from Porush requesting that they advertise in the newspaper.

One person close to Porush stated the pressure of some people not pleased with the new paper is understandable and it is evident the entire matter is being blown out of proportion towards thwarting the launch of the new chareidi daily.