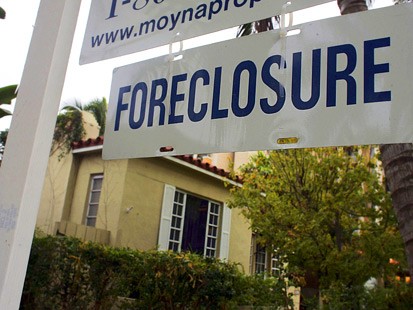 President Barack Obama threw a $75 billion lifeline to millions of Americans on the brink of foreclosure Wednesday, declaring an urgent need for drastic action — not only to save their homes but to keep the housing crisis “from wreaking even greater havoc” on the broader national economy.

The lending plan, a full $25 billion bigger than the administration had been suggesting, aims to prevent as many as 9 million homeowners from being evicted and to stabilize housing markets that are at the center of the ever-worsening U.S. recession.

Government support pledged to mortgage giants Fannie Mae and Freddie Mac is being doubled as well, to $400 billion, as part of an effort to encourage them to refinance loans that are “under water” — those in which homes’ market values have sunk below the amount the owners still owe.

“All of us are paying a price for this home mortgage crisis, and all of us will pay an even steeper price if we allow this crisis to continue to deepen,” Obama said.

The new president, focusing closely on the economy, in his first month in office, rolled out the housing program one day after he was in Denver to sign his $787 billion emergency stimulus plan to revive the rest of the economy. And his administration is just now going over fresh requests for multiple billions in bailout cash from ailing automakers.

Wall Street has shown little confidence in the new steps, declining sharply on Tuesday before leveling off after Wednesday’s announcement. The Dow Jones industrials rose 3 points for the day.

Success of the foreclosure rescue is far from certain.

The administration is loosening refinancing restrictions for many borrowers and providing incentives for lenders in hopes that the two sides will work together to modify loans. But no one is required to participate. The biggest players in the mortgage industry temporarily had halted foreclosures in advance of Obama’s plan.

Complicating matters, investors in complex mortgage-linked securities, who make money based on interest payments, could still balk, especially those who hold second mortgages or home equity loans. Their approval would be needed to prevent many foreclosures.

“The obstacles have not gone away,” said Bert Ely, a banking industry consultant in Alexandria, Va.

“It seems to offer little help to borrowers whose loan exceeds their property value by more than 5 percent,” he said, noting that that requirement would limit the plan’s success in some of the hardest-hit areas in California, Florida, Nevada and Arizona and parts of the East Coast.

Indeed, Obama himself said, “This plan will not save every home.”

The goal is to lower many endangered homeowners’ payments to no more than 31 percent of their income. But that depends on a high degree of cooperation by lenders who have been increasingly wary of new lending as the crisis has deepened.

Still, the Obama administration, after talking with mortgage investors, appears confident that it is providing the right mix of incentives and penalties to make sure mortgage companies take part. Obama said he backs legislation in Congress to allow bankruptcy judges to modify the terms of primary home loans — an idea ardently opposed by the lending industry.