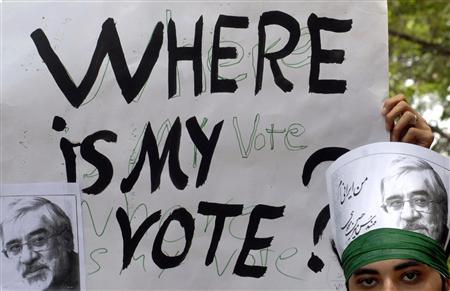 [VIDEO LINK BELOW] Tens of thousands of Iranians took to the streets of Tehran Monday, defying a country-wide crackdown with protests against the hotly-disputed results of last week’s presidential election.

Chanting crowds, some wearing green campaign colors, greeted Mir Hossein Mousavi, the defeated candidate in Friday’s election, as he slowly moved through the streets on the back of a car.

Scuffles broke out as Ahmadinejad supporters, riding motorbikes and armed with sticks, attacked the demonstrators along the route.

But Iranian television painted a more violent picture, saying that pro-government militia opened fire on the crowd of Mousavi supporters, killing at least one, Reuters reported.

“There has been sporadic shooting out there… I can see people running here,” a reporter from Iran’s English-language Press TV told Reuters.

“We want our president, not the one who was forced on us,” said 28-year-old Sara, who gave only her first name because of fears of reprisals from authorities.

Both Mousavi and Mehdi Karroubi, another defeated candidate who appeared alongside him Monday, have lodged complaints that the vote was rigged.

Some of the results – which awarded a record-breaking 25 million votes and 63 percent of the electorate to Ahmadinejad – were announced before the ballot boxes had even been opened.

On Monday, Ayatollah Ali Khamenei, Iran’s Supreme Leader, ordered an investigation into allegations of election fraud, marking a stunning turnaround by the country’s most powerful figure and offering hope to opposition forces who have waged street clashes to protest Ahmadinejad’s re-election.

The decision came after Mousavi wrote a letter appealing to the Guardian Council and met Sunday with Khamenei, who holds almost limitless power over Iranian affairs. Such an election probe by the 12-member council is uncharted territory and it not immediately clear how it would proceed or how long it would take.

Election results must be authorized by the council, composed of clerics closely allied with the unelected supreme leader. All three of Ahmadinejad’s challengers in the election – Mousavi and two others – have made public allegations of fraud after results showed the president winning by a 2-to-1 margin.

“Issues must be pursued through a legal channel,” state TV quoted Khamenei as saying. The supreme leader said he has “insisted that the Guardian Council carefully probe this letter.”