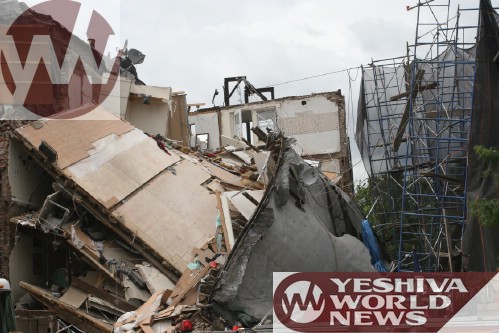 2:05PM EST: [PHOTO LINK BELOW] A 4 story building has collapsed with possible people trapped inside. The location is Ryerson Street and Myrtle Avenue.

The FDNY has transmitted a signal 10-60 (“Major Emergency”). Dozens of emergency personnel are being scrambled to the scene.

Initial reports state that people may be trapped beneath the rubble.

UPDATE 2:40PM EST: There are three civilians unaccounted for at this time, and searches are underway. A YWN reporter live on the scene reports that the entire structure has collapsed. A full photo album will be uploaded shortly.

UPDATE 2:53PM EST: A 10-year-old girl is currently being treated. Sources tell us that she lives in a neighboring building, and was not pulled from the rubble. There are still three people missing….

FINAL UPDATE FROM WCBSTV: A four-story building collapsed in the Fort Greene section of Brooklyn Sunday, sending one man to the hospital with apparent minor injuries, authorities said.

The mixed-occupancy building with a bar on the first floor, located at Myrtle Ave. near Ryerson St,, collapsed shortly before 3 p.m.

The Fire Department responded to the scene. Three minor injuries were reported in all, none to firefighters. One man was taken to Brooklyn Hospital with minor injuries from falling bricks.

FDNY conducted standard search procedures, but said it appeared everyone was accounted for. The department said no one was in the building when it collapsed.

Authorities said city inspectors were investigating nearby buildings to make sure they are structurally sound. The entire block was evacuated while the city Buildings Department conducted its inspections.