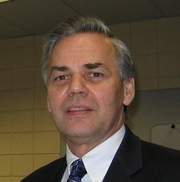 St. Lawrence took offense at Levine’s characterization of Town Hall as a corrupt patronage mill, while Levine now accuses the supervisor of attempting to silence critics by bullying them in court.

In documents filed Tuesday with the state Supreme Court in New City, Levine, who is Spring Valley’s village attorney, said his comments and those of his running mates were constitutionally protected.

Levine said he saw St. Lawrence’s June 16 lawsuit as “intended to intimidate and silence critics by burdening them with the cost of a legal defense until they abandon their criticism or opposition.”

The charges filed by Levine and his running mates, -Veronica Boesch and Rodrigue Lustin – included that St. Lawrence was attempting to stifle political debate “and chill others from running for office.”

Levine, Boesch and Lustin are challenging St. Lawrence and Councilmen David Stein and Yitzchok Ullman in Ramapo’s Democratic primary in September, the first of its kind in 26 years.

The primary also pits Town Justice Rhoda Schoenberger against challenger Marc Citrin, who is an attorney and a Montebello village trustee.

St. Lawrence, who is seeking his fifth two-year term, also has objected to a speech Levine made to about 200 supporters outside Town Hall on May 31.

St. Lawrence said Levine aimed to injure his reputation and expose him to public ridicule.

When asked whether he would debate St. Lawrence, Levine said he was drafting a challenge in a letter to the supervisor.

Levine said he was proposing a series of debates in various locations around the town.

“I look forward to the opportunity to expose his ineffectiveness in the village of Spring Valley and talk about the record of accomplishments we’ve had in the town,” St. Lawrence said.

“I’m sure he doesn’t want to talk about his high taxes, or about why the town is constantly entertaining huge (construction) projects such as Patrick Farm,” Levine said. “I can’t wait.”