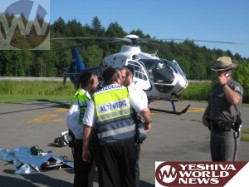 [VIDEO & PHOTO LINKS BELOW] Catskills Hatzolah was on the scene of a serious accident in Liberty, NY on Monday afternoon.

A young Bochur was driving on Route 55 & Ferndale Loomis Road when his vehicle was he was reportedly struck (“T-Boned”) by another vehicle. The victim was pinned in the vehicle, and extrication by the fire department was required to have him removed from the vehicle.

He was taken by Catskills Hatzolah Paramedics to the NYSP Liberty Barracks, where Lifenet 75 (Medevac) was awaiting their arrival. He was then airlifted to Saint Francis Hospital in Poughkeepsie, NY – where he is Boruch Hashem in stable condition.

At precisely the same time of this accident, emergency personnel were on the scene of a second serious crash involving an overturned vehicle – with a person ejected from the vehicle with serious injuries. A chopper was called for this incident as well, and the patient was flown to a trauma center. Hatzolah was not called to the second incident which occurred in Swan Lake, NY, on Brisco Road & Shore Road.