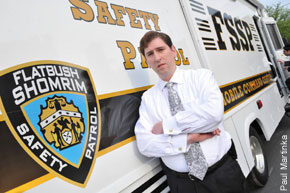 [VIDEO LINK BELOW] Today, Chaim Deutsch, Founder of the Flatbush Shomrim, endorsed Mayor Mike Bloomberg’s bid for re-election. The Flatbush Shomrim is a group of neighborhood volunteers who conduct safety patrols throughout the Flatbush area, regularly reporting conditions and potential criminal activity to the local police precincts. Mr. Deutsch, a native New Yorker who has lived in Flatbush for over 21 years, founded the Flatbush Shomrim 18 years ago with the goal of providing a safer community for his friends and family.

“I started the Flatbush Shomrim when crime in our area was rapidly getting out of control. Under Mayor Bloomberg, crime has dropped to its lowest point in 40 years,” said Mr. Deutsch. “As someone deeply concerned with our city’s safety, I can unequivocally say that Mike Bloomberg has put our well-being first and deserves to be re-elected in November.”

“Chaim and the volunteers who patrol Flatbush do a great service for their community,” said Mayor Bloomberg. “I am proud of the work we have done across this city to reduce crime by nearly 30%, and this year we are on course to keep crime at historic lows. I am grateful to Chaim and I appreciate his continued support.”

Under Mayor Bloomberg’s leadership, New York City’s crime rate is at its lowest level in over 40 years. In the Flatbush area, crime is down in the 67th and 70th precincts by roughly 35% since 2001, and an additional 15% so far this year.  In keeping with his commitment to making communities better for New Yorkers, the Mayor overhauled the City’s Noise Code and introduced NYPD Operation Silent Night, which targets problem areas for increased enforcement of noise code violations.  Additionally, New York City’s streets are the cleanest they have been in more than 30 years.