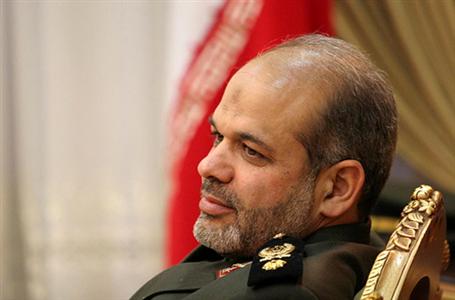 Argentina expressed outrage over Iran’s nomination of a man wanted in connection to a 1994 Buenos Aires bombing of a Jewish center that killed 85 people as the next defense minister.

Iranian President Mahmoud Ahmadinejad tapping Ahmad Vahidi for the post is “an affront to Argentine justice and the victims of the terrorist attack” on the Jewish community center, the Foreign Ministry said in a statement.

News of the nomination was received “with grave concern and deserves the most energetic condemnation of the Argentine government,” it said.

In 2007, Interpol issued what it calls a Red Notice on Vahidi, a former head of Al Quds, an elite unit of Iran’s Revolutionary Guard. Interpol under the notice distributed Argentina’s arrest warrant for Vahidi to member countries.

The July 9, 1994 bombing leveled the seven-floor Argentine Jewish Mutual Association (AMIA) building in Buenos Aires, killing 85 people and wounding 300. No single individual has ever been convicted for the bombing.

It was the worst terrorist attack in Argentina, which has the largest Jewish community in the Americas outside the United States, and the second large-scale anti-Jewish strike in Buenos Aires that decade.

In 1992, the Israeli embassy in Buenos Aires was leveled in a bombing that killed 22 people and wounded 200.

In Washington, US officials reacted with concern.

“If this report is true and if this man is confirmed as a cabinet minister and is wanted by Interpol for his involvement in a terrorist act, of course this would be disturbing,” State Department spokesman Ian Kelly said.

But Tehran brushed aside the criticism as part of a “Zionist plot.”

How come they didn’t bring it up in the past?” asked Ahmadinejad press adviser Ali Akbar Javanfekr, referring to the Argentine complaint.

“Mr Vahidi was a deputy defense minister and this is very senior political position,” he told AFP.

“Therefore, it seems that this is a new trick being planned and is basically a Zionist plot.”

Among the other Iranians also wanted by Interpol as part of its assistance to Buenos Aires in the case are Iran’s former intelligence chief Ali Fallahian and the former head of the country’s Revolutionary Guards, Mohsen Rezaei, as well as three Iranian diplomats.

Argentine prosecutors allege Iran masterminded the bombing in Buenos Aires and entrusted the Lebanese militant group Hezbollah to execute it.

But Interpol’s executive committee withdrew its warrants against Rafsanjani, Velayati and another Iranian.