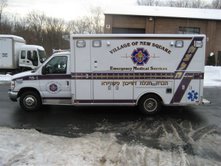 [UPDATE IN EXTENDED STORY] (10:40PM EST MONDAY) A Hatzolah Ambulance was detained for over an hour, and another member ticketed for responding to an emergency call on the Palisades Parkway (PIP) this evening, YWN has learned.

Sources tell YWN, that Hatzolah received a call for a vehicle involved in an MVA with multiple patients on the PIP, and dispatched units direct, as well as an ambulance from New Square Hatzolah.

Unfortunately, this is not the first incident involving the PIP Police Department. In fact, they have a reputation of many altercations with Hatzolah in the past.

The situation became so bad approximately five years ago, that Kiryas Joel Hatzolah stopped using the PIP to transport patients to NYC. Instead they take a longer route using NJ Route 17.

Four patients were transported by EMS to Nyack Hospital in stable condition from tonight’s accident.

UPDATE 12:50AM EST TUESDAY: In regards to the comments written by YWN bloggers stating that Hatzolah is not licensed to operate in the state of New Jersey, YWN is exclusively publishing the following letter – which speaks for itself:THE FOLLOWING WAS WRITTEN ON MARCH 19, 1996 BY THE DIRECTOR OF STATE OF NEW JERSEY, DEPARTMENT OF LAW & PUBLIC SAFETY (DIVISON OF HIGHWAY TRAFFIC SAFETY):

In another matter that is of priority concern, especially in the northeast part of the state (NJ), is the Chevra Hatzalah. It is a volunteer ambulance association run by the Hasidic Jewish community out of New York. They are a voluntary group who provide ambulance service at no charge to the Jewish community. They do travel a great deal through the northeast part of the state in going to and from the southern counties of New York State. There is also a very active group in the Lakewood community. They are fully trained and licensed by the State of New York as EMT’s which is recognized by our EMS system here in New Jersey. The problems that have arisen is that on occasion our various public safety officials have failed to recognize them as a qualified ambulance group. Their responses in New Jersey is on request by a member of the Jewish community who desire an ambulance corporation who share their religious beliefs. In addition, when they come upon an auto crash and want to assist they have been denied the opportunity to do so. I mention this particular group so you might pass it on to your public safety people advising them that they are legal, fully qualified, and licensed to provide first aid and transport. They in no way intend to interfere with any local rescue squad. All they want to do is provide assistance with public safety being uppermost.

If you have any questions about either matter, feel free to contact my office or staff for assistance at any time. Thank you for your time and past support.