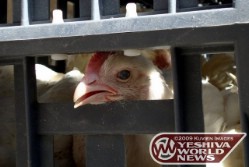 The following is a press release submitted to YWN by an organization named Farm Sanctuary. They claim to be “the nation’s leading farm animal protection organization”. We found it entertaining. Perhaps you will too. (Below is the entire unedited text sent to YWN)

Today, as millions of Jews observe Yom Kippur, Farm Sanctuary, the nation’s leading farm animal protection organization, rescued a chicken, named Chesed, meaning mercy or loving-kindness in Hebrew, from sacrificial slaughter during the Jewish ritual of kapparot in Crown Heights, Brooklyn. This chicken will join the more than 200 other chickens the organization has rescued from kapparot rituals in New York City and the surrounding boroughs over the past three years.

The chicken was rescued by Brooklyn resident Wayne Johnson, who witnessed a massive kapparot gathering at a seminary in the Crown Heights neighborhood of Brooklyn on Saturday night. At 9:30 p.m., a large truck transporting approximately 2,000 chickens, packed four to a crate, arrived at the seminary. A long line of people waited to purchase chickens for $13 apiece, which they then swung over their heads while reciting a prayer before taking them over to a table where a butcher slit their throats with a knife. Around 11 p.m., a man shoved a chicken into the arms of Johnson, who had made it known he did not approve of the inhumane ritual, and told him he could have the bird. Johnson gladly accepted the frightened chicken and took him to his Brooklyn Heights home to await safe transport to Farm Sanctuary’s shelter in upstate New York. Halfway through the subway ride home, Johnson says the chicken began to relax and nestled into his arms.

“Saving Chesed is in keeping with the true spirit of Yom Kippur,” said Farm Sanctuary Executive Director Allan Kornberg. “Chesed’s life will serve as a reminder to the thousands of visitors who come to our sanctuary that all life is deserving of mercy and loving-kindness.”

The rescue comes just days after Dr. Allan Kornberg, Executive Director for Farm Sanctuary, issued the following statement regarding the sacrificial slaughter of chickens during the Jewish ritual of kapparot:

“Sadly, some members of the Jewish faith who observe the kapparot ritual still commit animal cruelty during this ceremony by swinging chickens over their heads and then slicing their throats with razors. Those who participate in this form of kapparot believe that their sins will be transferred into the chicken’s body and extinguished along with the bird’s life, but many distinguished rabbis throughout history have argued that treating chickens in this manner violates both kosher food standards and the Torah’s teachings on cultivating compassion for animals. In fact, an Israeli court ruled in 2007 that killing chickens for kapparot violates the country’s animal welfare laws, codifying in modern law what these sages have been saying for centuries.

“To fully grasp the ethical objections to using chickens for kapparot, it is crucial to understand that swinging and slaughtering is not the beginning but merely the end of the birds’ suffering. First, most of these chickens are born and raised in dark, crowded warehouses on factory farms. Then, after being packed tightly together on trucks and driven long distances to large cities, chickens may wait for days in cramped cages before kapparot even begins, often lacking food, water and shelter from inclement weather. Farm Sanctuary, the nation’s leading farm animal protection organization, has firsthand experience with the traumatic suffering caused by kapparot, having rescued hundreds of chickens from rituals in New York City over the years and lovingly cared for them at our shelter for abused and neglected farm animals in upstate New York.

“Fortunately, celebrating kapparot need not involve animals at all, because Rabbinical law stipulates that there are humane ways to partake of this sacrament. That is, even the most orthodox among us can spare a chicken’s suffering by making a monetary donation to a worthy cause instead of sacrificing a bird, and those wanting to experience an authentic kapparot ceremony can put their material offering in a bag and use it as part of the ritual in the same way they would a live chicken. In contrast to slaughtering innocent animals, practicing kapparot humanely is consistent with the prayers offered up during the high holy days to rachamim (compassion and sensitivity), and is in keeping with the true spirit of Rosh Hashanah and Yom Kippur.”