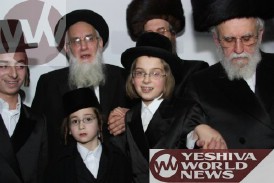 Sixty one years have passed since Pirchei Agudas Yisroel of Great Britain humbly celebrated its very first Siyum mishnayos. Little did those early day Pirchim or their enterprising leaders know that their ground-breaking yet modest assembly was eventually to develop into an annual national event, which would under an enormous snowball effect rapidly expand over the decades. Back in those post churban Europe years, even those with the most vivid of imaginations would not have dreamt that their, kind of passing, instigation would be the catalyst for a fresh yoimo tovo, on an enormous scale, for hundreds of tinokois shel beis rabbon every year.

The uncanny phenomenon with this yearly event is that, true to its torahdik character, against all odds of nature the siyum only seems to gather more momentum as the years and decades pass. The splendid, grandiose annual national siyum shass mishnayois which was celebrated by the Pirchei Agudas Yisroel of Great Britain last motzei shabbos, although having been preceded by 60 similar events was unique. The true simcha and excitement, yes enhanced by such a glitzy occasion, displayed by the over 700 boys in attendance, many of who came home hoarse, proved again that torah and the upkeep of its honour is what the pure souls of our dear children yearn for.

The siyum was held at the large Beis Yaakov function hall on Broom lane which was backed up by a huge marquee in order to accommodate the large number of Baaleibatim and spectators who could see the proceedings both through the glass wall of the hall and by means of large video linked screens. Well before commencing time crowds of boys, boosted by that typical yiddisher excitement, could be seen streaming towards the hall at which the massive Kiddush Hashem event was to take place.

The fact that the event took place only several hours after shabbos added so much spice to the upbeat atmosphere which carried with it that special melave d’malka glow and. Only hours before had yidden recited the verse Layehudim hoyso oiroh and as chazal teach us oiro refers to torah, here it was the vouching for itself. Strict order was being kept by chaveirim volunteers and madrichim whether on the precarious weather conditioned road outside the hall, on the snow covered car park and at the entrances to the venue. Once all Pirchim were happily seated a long row which included many of the town’s respected rabbonim paraded into the hall to the well known tune of Seu sheorim rosheichem and the proceedings began.

“The gathering possesses the special power of ‘Kol Yakov’ declared chairman Rabbi Shmuel Goldberg, rov of Prestwich Damesek Eliezer shtibel as he called up Rabbi Shmuel Moshe Goldberg, Mashgiach ruchni of eshivas Shaarei Torah to lead the assembly with a perek Tehilim. Avrohom Zev Taylor of Manchester recited the final mishna which he followed with a short explanation and the hadran. Quoting the Tiferes Yisroel commentating on the sequence of issues dealt with in that mishna, Avrohom Zev spoke about the importance of harmony which is needed together with torah study. The kaddish d’rabbonon was said by longstanding siyum co-chairman Reb Dovid Noach Olsberg in whose father in law, the late respected philanthropist Reb Mordche Weisz’s memory the mishnayois was learnt. Quoting the possuk Bruchim haboim which chazal say was said in honour of those bringing their bikurim fruits to the beis hamikdosh, chairman Rabbi Goldberg likened the mishnayois painstakingly studied by the boys as the fruits of their labour. Although the siyum has been going on for many years and you might think that those of the previous generations have no relation to us, you boys are connected through your torah to both the older and new generations, said Rabbi Goldberg. At this point the chairman poignantly remembered the late renowned leading British Aguda askan, Reb Yitzchock Meir Cymerman z”l who had passed away earlier on in the week.

Following his royal welcome during which boys were stretching their necks to catch a glimpse, revered moro d’asro Rav Menachem Mendel Schneebalg affectionately called on them to pay attention to his words. Its needless to say, said the rov, that the learning of mishnayos is treasured by Hakodosh Boroch Hu and by all, through its study one links themselves to the torah, to Sinai and to all the talmidei chachomim on the world. It is known to us all, pointed out the rov, that nowadays Heavenly assistance is required to stand up against the terrible yetzer hora which wants to bring about wrongdoings. On the other hand its known especially to those who learn torah what the will of Hashem Yisborach is. In the sefra we see that Yakov ovinu blessed them with the words Hamaloch hagoiel oisiy mikol ra, the Gemoro refers to ra as the yetzer hora. What every one of you boys needs for this power is to daven with a Minyan, learn torah, to honour everyone and taking on a serious note the rov added and not look on the internet which represents a great danger against klal Yisroel r”l. You have many opportune times ahead of you, said the rov, but in order to indeed progress a desire is needed and to achieve that one must search for ways and means. The rov concluded with a blessing that they should be able to continue learning and provide a source of nachass to the rebbes and parents.

The gathering was then treated to a first round of Reb Menachem Fordsham’s choir which under his master leadership performed brilliantly. 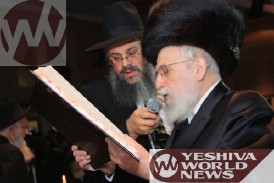 At this stage the evening began to move towards its main goal the publicly honouring and awarding those who had learnt large amounts of mishnayois. Diplomas were presented to a long list of boys who had learnt between 25 and 100 mishnayos. The names were read out by long time Pirchim associate Mr Naftoli Lebrecht and were presented by Rabbi Yehoshua Israel. The chairman observed that Mr J. Salomon who was present at the event actually attended the very first siyum all those years ago, he added that a Manchester resident Mr R. Gutentag was at that siyum too.

Our heart is full of Simcha and jubilationat the fantastic sight of the 61st Pirchim Siyum, declared Rosh Manchester Beis Din, Dayan Gavriel Krausz, who went on to remind the boys what the secret of our success is. After nearly 2000 years of bitter golus we still always rise to the top like olive oil, this is because we keep ourselves separated from the nations of the world. What excites us is the torah, said the dayan who left no room in the boys minds for pursuit of other materialistic matters. Boys spend their time learning mishnayois and other limmudim he commented adding that the fitting surroundings are also of high importance.

Prizes were then distributed to boys who had learnt between 100 and 200 mishnayois. The names were read out by Aguda activist Mr Yossi Schleider of London and were presented by Mr Dovid Spielman who has been a madrich for the pat 35 years.

The evening really began to gather momentum now as the list of boys who had learnt between 200 and 500 was read out by Rabbi Yehuda Brodie and the prizes to these lomdim were presented by Rosh Mechina, Rabbi Noach Baddil.

The chairman thanked the boys of both the mechino and the Etz Chaim school for their tremendous help over the siyum and the weekend.

Excitement began to grow and glow as Rabbi Shimon Kaplin, embellishing the high key moments with divrei chizzuk and stories, began to excitingly lead the major prize giving stages. This upper key stage started with boys who had learnt between 500 and 1000 mishnayois. There were10 high scorers in this group whose ages ranged between 11 and 13 and this lot began to really get the boys on their feet.

The dazzling spotlights which were shining their powerful rays on our young heroes together with the clapping and cheering of the hundreds of excited kinderlach were now working ever so hard as the names of the three boys in the second to top list were called out. Pinchas Menachem Warhaftig, 12 years of age from Stamford Hill learnt 1000 mishnayois and was awarded with the Reb Yankel Kraus memorial prize. Gershon Bookey aged 13 of Golders Green who had learnt 1003 was awarded with the Doctor Nosson and Mrs Kreindel Redmond memorial prize and Ahron Katzauer aged 11 of Gateshead received the Moshe Yossef Feingold memorial prize for learning 1020 mishnayos.

The guest speaker Rabbi Shlomo Hoff, Rov of Ohel Torah Shul captivated the children’s attention as he described to them the extreme importance of concentrating on the true tachlis for which the beautiful creation was made. The most important people are those who learn torah and not the presidents and prime ministers, explained Rabbi Hoff in a most articulate and gripping manner as he declared that he wants the boys to know how truly important they are.

Mere words in newspaper columns will not do justice to the riveting Simcha and wall shaking excitement, demonstrated by one and all and which broke all boundaries and previous records as the two top prize winners respectively came forward to receive the awards for their heroic efforts. 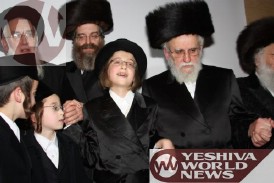 First 12 year old Pinchos Shlomo Feldman, son of Reb Zvi Feldman of North London’s Gerrer community was called up to receive his due honours and deserving prize. Pinchos Shlomo the siyum’s second to top had mastered 2025 mishnayois and was awarded with the Reb Yossel and Frieda Halpern memorial prize, a shass mishnayois. The award was followed by singing and dancing on the stage by the rabbonim and leaders who were joined by members of the Feldman family including the boy’s father who had come in from London to witness and to be part of these great moments.

Next came the grand event’s top winner 13 year old Yitzchock Yehoshua Heschel Friedman, son of Rabbi Yisroel Friedman of Sadiger, Golders Green a son of the renowned Sadigerer Rebbe of Yerusholayim. Yitzchock Yehoshua Heschel, who had mastered 4060 mishnayois, was called out by Rabbi Kaplan as ‘Chassan Hatorah’ and was carried to the stage aloft on a chair escorted by crowds of singing friends and admirers. The shass bavli awarded for this major achievement was the habochur Dov Patashnik and habochur Shimon Adler memorial prize. Yitzchock’s father and maternal grandfather the celebrated askan and philanthropist Reb Chaim Moshe Feldman of Stamford Hill specially came in from London in order to savour these exalted moments at which their young son, grandson, the evenings great hero definitely made history. The atmosphere during the singing and dancing which followed the awarding of the top prize is indescribable. These beautiful scenes and fantastic moments have definitely left indelible impressions on the minds of all those present.

Thanks were made by Reb Dovid Noach Olsberg to his co-chairman Reb Yaakov Menachem Salomon and wonderful committee. Thanks were also extended to Reb Ezriel Salomon and Reb Naftoli Lebrecht of Gateshead and to Reb Yossi Schleider of London and to the ladies committee. Bentsching was given to Reb Shlomo Klein a son in law of the late Reb Mordche Weisz z”l. The evening was termed as a great success and the out of town boys returned home on Sunday