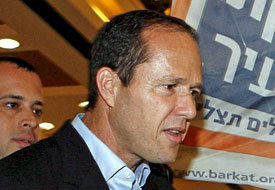 It now appears that Jerusalem City Hall, primarily Mayor Nir Barkat, is less interested in seeing an ashkenazi chief rabbi affiliated with the Zionist camp as he is in seeing one of the rabbis being dati leumi-affiliated. Once again, this report, as the many previous reports addressing the heated race, are in the realm of respectable speculation, based on information provided from people involved in the process.

It appears that Barkat, who is bound by his pre-election deal with dati leumi supporters, may be willing to accept a Sephardi dati leumi rav, in this case, HaRav Tzion Arusi of Kiryat Ono, a reality that would deliver a major blow to Shas, with the Sephardi party working to close a deal with the mayor in favor of placing the Shas candidate in the sephardi rabbinical post and the mayor’s dati leumi candidate in the ashkenazi post. Shas is willing to turn its back on chareidi ashkenazi rabbonim, as the rabbonim refused to support Shas in a bid for a slot on the Chief Rabbinate Rabbinical Council. Shas cut a deal with the dati leumi community and they emerged successful while the ashkenazi chareidim were the big losers.

If Rav Arusi is accepted as the mayoral candidate, many believe that the Ashkenazi Chief Rabbi will become Rav Moshe Chaim Lau, a son of the current chief rabbi of Tel Aviv and former chief rabbi of Israel, Rabbi Yisrael Meir Lau. Another son by the way, Rav David Lau, is the chief rabbi of Modi’in.

This is also based on reliable rumors that HaGaon HaRav Dovid Grossman Shlita, rav of Migdal Ha’emek, is expected to announce he is dropping out as a contender for the slot of ashkenazi chief rabbi. If this pans out, the current leader in the dati leumi camp, for the ashkenazi rabbinical slot, Rav Stern Shlita, will lose as well. (If R’ Grossman remains a contender, the formula does not play out).

If this scenario pans out, Shas can be expected to begin increasing pressure towards the appointment of its candidate, one of the son’s of Chacham Ovadia Yosef Shlita.