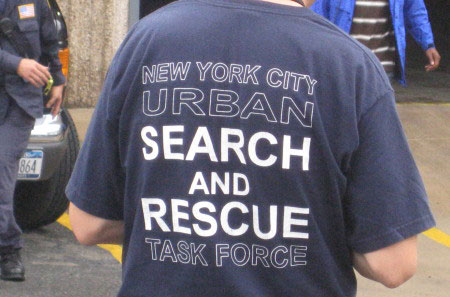 Among those offering to help the people of Haiti is a group of emergency medical technicians and a search and rescue taskforce from Brooklyn who have volunteered to make the trip to the devastated Caribbean island.

A warehouse in Bedford-Stuyvesant was where the New York City Urban Search & Rescue Task Force members were gathering. The 80 or so members of Task Force One are hoping to be on the ground in Haiti by the afternoon.

The rescue team is managed by the Office of Emergency Management. It is made up of highly trained personnel from the NYPD and FDNY who specialize in disaster relief and emergency triage and medicine.

Befitting of their name, the taskforce has been loading equipment they could use to search for victims through the sea of rubble that remains of the capital.

The taskforce will travel with a doctor and 4 K-9 units.

This is just one aspect of a community wide response to a national tragedy.

Mayor Michael R. Bloomberg greeted members of the task force at the Office of Emergency Management’s (OEM) warehouse in Brooklyn prior their departure.

“President Obama asked for our assistance and we are answering his call to respond to the unimaginably tragic events in Haiti by sending the best – our specially trained joint task force of New York City police officers and firefighters,” said Mayor Bloomberg. “The world came to our aid on 9/11 and we want to provide assistance around the globe when needed, whether it’s giving supplies, sharing lessons learned, or sending our first responders to help people. Our team should be on the ground in Haiti later today and I want to say to all of them, on behalf of all New Yorkers – be safe and thank you for lending a hand to people in dire need.”

“None are more experienced and they all have in common the desire and expertise to serve at the highest level possible,” said Police Commissioner Raymond W. Kelly.

“All of us in the FDNY are shocked and saddened by the devastation in Haiti,” said Fire Commissioner Salvatore J. Cassano. “We’re grateful, however, that many of our members are specially trained to help people under the very worst circumstances and that we’re bringing that help to them today.  Just as the world stood beside all of us after the tragic September 11th attacks, we know it’s our duty to help others crippled by disaster, whether it’s a hurricane along the Gulf Coast or an earthquake in Haiti. We’re very proud to be a part of the relief effort.”

“New York City has some of the finest first responders in the world. The Urban Search and Rescue team is specifically trained to deal with heavy concrete, steel, and unstable conditions like those brought about by Tuesday’s devastating earthquake in Haiti. Two months ago, this team faced the aftermath of a mock earthquake at a drill in upstate New York – I know they are ready to put their newly honed skills to work and will prove invaluable to the Haitian rescue efforts.”

New York Task Force One is managed by the Office of Emergency Management (OEM) and the team is equipped with the latest technology and equipment, trained to respond to catastrophic events involving the collapse of heavy steel and concrete. New York Task Force One specializes in urban search and rescue, disaster recovery, and emergency triage and medicine. Eighty members of New York Task Force One and approximately 20 tons of equipment will depart from OEM’s Brooklyn facility before deploying from Stewart Air Force Base in Newburgh, New York. The team is expected to arrive in Haiti early this afternoon or this evening. There are 28 FEMA Urban Search and Rescue teams strategically located throughout the United States which can be deployed within six hours of activation.

The following are Mayor Bloomberg’s Remarks as Delivered at the Office of Emergency Management’s Warehouse in Brooklyn:

“Good morning, we’re here in Brooklyn at the Office of Emergency Management’s warehouse, where we store supplies and facilities – things that we would need in an emergency. The federal government asked us if we would send down one of our teams and so we’re dispatching 40 firefighters and 40 cops and some people from OEM.

“They’re going to take their supplies and equipment with them, drive up to Stewart Air Force Base and then fly to Haiti, from there they should be on the ground in Haiti late this afternoon, early evening. And I just wanted to say to all of them be safe and thank you for being willing to do this.

“It’s a terrible tragedy in Haiti and New Yorkers, as you know, remember that the world came to our aid back on 9/11 and we want to make sure that we do it wherever we can around the world, whether it’s giving advice or giving supplies or actually sending our first responders to help people.

“The ways the public can help is to make donations – I would suggest you call 311. They will connect you to the Mayor’s Fund to Advance New York. We have facilities to make sure that your dollars will get to reputable organizations that really can make a difference. And I would just urge people don’t give to organizations that you’re not familiar with. There are always people that want to scam people and take money. So far, very generous New Yorkers have given almost a quarter of a million dollars, most of it in small donations. There are a couple of big ones we’re working on, but sending canned goods, sending water, those kind of things, there’s just not the facilities to get it there and to get it distributed. Perhaps down the road that will be useful, but at this point the only thing that really helps is to get our monies to organizations like, for example, the American Red Cross, that will put trained people on the ground and those people certainly are going to be there quicker than anybody else. They know how to get around.

“But at this point in time, call 311 if you want to make a donation. And the meantime I know I speak for all New Yorkers that we want to thank our first responders, the police and firefighters who are going down there and the Office of Emergency Management for everything they do.  And just urge them to stay safe.

“But the bottom line is Haiti is a dangerous place – the rubble moves around, they obviously have some crime problems and without the infrastructure that we would normally expect. This is a situation that is very fluid and a situation where a great tragedy is taking place. A lot of lives were lost, a lot of people were injured. There’s not the medical care and the facilities to take care of those people. And there’s also the potential for aftershocks. The seismologists said that this is a fault line that they hadn’t expected anything to take place on, but it is still potentially dangerous now.”