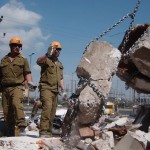 [VIDEO LINK BELOW] After nearly 10 days, an Israeli Search and Rescue team saved a 22-year-old Haitian man from the ruins of a three-story building, near the presidential residence in the southern side of the city. The man was transferred to the IDF field hospital in stable condition and is currently receiving further medical care.

A search conducted by Population Management officers from the Home Front Command, headed by Lt. Col. Rami Peletz, were directed to the location of the trapped man by local residents.

“American and French doctors were unable to rescue the trapped man and called upon the Israeli delegation’s search and rescue teams who rescued the man within half an hour, from a tunnel, 2.5-3-meters long and were able to release him whole and healthy,” said Maj. Zohar Moshe, a member of the rescue team.

As of Motzei Shabbos (EST), a total of 827 patients were treated by the IDF Field Hospital, 251 surgeries performed, and 14 babies delivered.