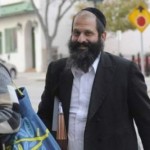 Washington, D.C. – Agudath Israel of America executive vice president Rabbi Chaim Dovid Zwiebel joined a group of prominent rabbis gathered for a news conference at the National Press Club here today to express dismay and concern over the premature imprisonment of Sholom Rubashkin, and to urge the U.S. Department of Justice to closely scrutinize the demands by federal prosecutors in Iowa that Rubashkin be imprisoned before he is sentenced.

The group – which involved rabbis from some of the nation’s largest and most well known Jewish organizations – also walked to the Department of Justice to deliver the following letter to U.S. Attorney General Eric Holder requesting a meeting with him”

The undersigned rabbis are representatives of leading Orthodox Jewish membership organizations in the United States that speak for hundreds of thousands of Jewish families across the country.  We join together to express our profound concern and dismay over the harsh position taken by federal prosecutors in Iowa with respect to the pre-sentencing detention of Mr. Sholom Rubashkin. In light of numerous objective factors that make it clear Mr. Rubashkin is not a “flight risk,” and in light of certain compelling personal and familial considerations that render his pre-sentencing detention particularly cruel, it appears to us and many of our constituents that the prosecutors’ ongoing insistence that Mr. Rubashkin remain incarcerated through the long months he awaits sentencing is unjustifiable, even inhumane. We respectfully urge you, Mr. Attorney General, to take a personal interest in this serious matter, and to meet with our group to discuss it further.

This is not the first time we have had occasion to speak out about Mr. Rubashkin’s premature detention. Last year, he was imprisoned for 76 days prior to his trial, also on the ostensible theory that he was a flight risk. Our groups voiced our concern at that time, and eventually the District Judge agreed that pre-trial detention was inappropriate.

Although Mr. Rubashkin complied with every detail of the terms under which he was ultimately released before trial, the District Judge, at the urging of the prosecution, imprisoned him again after the jury’s verdict — as a result of which Mr. Rubashkin has been held in Linn County Correctional Center in Cedar Rapids, Iowa since November 12, 2009, pending his sentencing. His appeal from that decision is now pending, after an unexplained denial by three Circuit Judges, before the full Court of Appeals for the Eighth Circuit.

Legalities aside, we are astounded that the federal prosecutors have been demanding that he be incarcerated although he is demonstrably not a flight risk, and imprisonment severely curtails his religious observance. In addition, his current family circumstances are particularly heart-rending and call for his presence at home.

Mr. Rubashkin has been an observant Orthodox Jew since birth. His dietary observances prevent him from eating food that is not certified as kosher or that is heated in a non-kosher appliance. He, therefore, has eaten only cold food while in prison. In addition during his imprisonment he has been unable engage in the required communal prayer. And he is unable to perform other religious observances that would be available to him if he were in custody in his own home and permitted to leave rarely and under guard for religious observances.

He and his wife have ten children, six of whom live at home with their parents. They have an autistic 16-year-old son who has always been heavily dependent on his father. Mr. Rubashkin’s absence from his home at this time – when he is most needed to prepare his children in case he is sentenced to a lengthy prison term – is devastating.

The legal restriction regarding his release on bail prior to his sentencing depends entirely, we understand, on whether conditions of release are proposed that would assure his presence at sentencing. The District Judge released him prior to trial on GPS electronic monitoring and a $500,000 security bond. He complied meticulously with all conditions of pretrial release, and we – along with his community – are confident that he will continue such total fidelity to the conditions of release prior to sentencing if he is continued on the same bail terms.

Moreover, his friends and his religious community have offered to pay for a 24-hour private armed security guard that will, in effect, imprison him in his home until his sentencing. A total of approximately 8 million dollars in the equity of 43 homes has been offered as security for his appearance. And to demonstrate the intensity of their conviction that he will not flee, rabbis have offered Torah scrolls – that may not be assigned except for the most extreme and exigent needs – as security for his presence.

There is, we believe, no justification for the prosecutors’ ongoing insistence that Mr. Rubashkin remain in jail pending sentencing. We recognize that Mr. Rubashkin has been convicted of serious federal offenses, but they were not offenses that endangered society. Employing illegal aliens and committing bank fraud by compromising the security for a bank loan do not warrant the extreme draconian sanction of pre-sentencing imprisonment that the federal prosecutors have demanded and that courts have granted at their request.

We request that you review this case personally and that you meet with us for a discussion of this very serious injustice.

Rubashkin was convicted after a jury trial before Judge Linda Reade in federal court in Sioux Falls, South Dakota, of bank fraud relating to Agriprocessors’ loan from First Bank Business Capital of St. Louis, and for failure to pay livestock providers in a timely manner. The bank never filed a complaint and the loan was being paid until U.S. Immigration and Customs Enforcement (ICE) conducted a raid on Agriprocessors’ premises in May 2008, driving Agriprocessors into bankruptcy. The company was sold and the Rubashkin family is in debt. Charges that Agriprocessors employed illegal aliens have been dropped.

The petition for rehearing filed on behalf of Mr. Rubashkin by attorney Nathan Lewin notes that: “Sholom Rubashkin is not John Dillinger or Jack the Ripper, although he has been treated by prosecutors and by the courts, because of immense prejudicial publicity, as if he were Public Enemy No. 1.  The unseemly haste to imprison him is reminiscent of Lewis Carroll’s Queen of Hearts who proclaimed: “Sentence first, verdict afterwards.'”