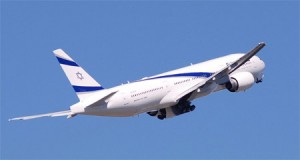 EL AL President Eleyzer Shkedy recently met with HaGaon HaRav Chaim Kanievsky Shlita at his home in Bnei Brak to consult with the Rav on a wide range of issues. During the meeting, HaRav Kanievsky praised EL AL and made the following statement, “Without a doubt, all Jews, especially those who are Shomerei Torah and Mitzvos, should prefer EL AL over all other airlines. Only on EL AL are there Kashrus and Shmiras Shabbas. Therefore, it is clear that those who fly EL AL are protected by a double Siyata D’shmaya.”

EL AL President Shkedy expressed his gratitude for the kind words and the opportunity to meet with the Rav. Shkedy is proud of EL AL’s identity as the world’s only Shomer Shabbos and kosher airline.