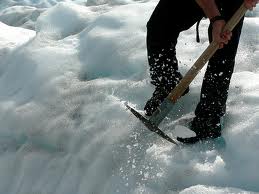 The Daily News reports: Okay New Yorkers, it’s time to get serious about shoveling the snow off your sidewalk – before it costs you.

The Sanitation Department says it has issued more than 2,500 tickets in the last month to owners who left their sidewalks slick and dangerous with ice and snow.

“It’s important that property owners clear a path for pedestrians after a snowstorm,” said Sanitation spokesman Matthew LiPani. “Failure to do so is a major safety hazard for the young and elderly alike.”

It’s especially important this year as New York has been walloped with 56.9 inches of snow even before yesterday’s ice storm.

On one snowy stretch of 48th St. in Borough Park, Brooklyn, an inch of black ice in front of four adjacent homes yesterday sent passersby slipping and sliding.

“This is against Jewish law,” railed Meir Shalom Rosenberg, 58, after he almost fell. “By not shoveling, they are causing people to get hurt.”

Property owners have to clear ice and snow from their sidewalks within four hours of the last flake falling, city rules say. If it stops after 9 p.m., the deadline is extended until 11 a.m. the next morning.

If the ice is packed too hard to shovel, property owners are required to put down sand, sawdust or something else to give pedestrians traction.

None of the four homes on 48th St. bothered to do that, leaving neighbors to contend with an ice rink.

“I shoveled it before. The neighborhood kids come and mess it up,” whined one homeowner who wouldn’t give his name. “It’s gonna snow tomorrow and then there’s another snowstorm. It keeps coming. I shovel everyday. Why doesn’t the city come to help?”

Told a Daily News photographer was on the way to document just how bad his sidewalk was, he stopped kvetching, grabbed a shovel and started picking at the ice.

“Borough Park is pretty bad,” said eighth-grader Jeffery Liberman, 14, after he slipped next door. “People are not doing a good job. It’s pretty hard to walk.”

City crews had their own well-publicized troubles trying to clear the streets after the blizzard, but records at the Environmental Control Board show the department waited at least five days after that storm before ticketing any homeowners.

LiPani said anyone can call 311 to report a hazardous stretch of sidewalk, which will bring Sanitation officers out to inspect it.