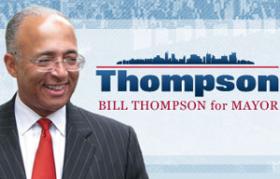 An administrative law judge has found Thompson’s 2009 mayoral campaign guilty of putting up 8,255 posters illegally on city property, The Post has learned.

Each violation carries a $75 fine.

The decision by Judge Clive Morrick came after a four-hour hearing last December, where Thompson’s lawyer Jerry Goldfeder argued that the campaign had done everything it could to dissuade volunteers from attaching posters to public property and has issued constant reminders about the strict law forbidding them.

Morrick didn’t buy that argument, since the law assumes the guilt of the sponsor of any illegal sign.

Campaign records show Thompson — the only declared candidate for mayor in 2013– has just $1,463.95 in his campaign treasury.

He has 30 days to appeal Morrick’s ruling.