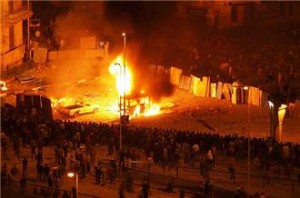 Heavy gunfire reverberated in central Cairo before dawn Thursday as supporters and foes of embattled Egyptian President Hosni Mubarak continued to face off at Tahrir Square, where chunks of concretes and Molotov cocktails were employed as weapons in the escalating crisis.

CNN personnel saw wounded people being carried into Tahrir Square, largely held by anti-regime demonstrators, through an entrance that leads to the nearby Egyptian Museum. Several ambulances entered and left the square shortly before 4 a.m. Thursday.

The source of the gunfire was not immediately known.

Sustained automatic weapons fire, including from what sounded like a heavy machine gun, echoed around the square, the epicenter of nine days of protests calling for Mubarak’s ouster.

Anti-government demonstrators hunkered down behind makeshift barricades in the square and outside the nearby national museum against the onslaught, which demonstrators said included plainclothes police officers.

“They’re coming in with weapons. They’re spreading violence,” human rights activist Gigi Ibrahim told CNN on Wednesday. “We’ve had peaceful protests here since Friday and no violence here. Only today were we faced with this really violent reaction.”

The pro-government protesters were not impeded by the army when they entered the square, CNN’s Ben Wedeman said early Thursday. Anti-regime protesters are now unhappy with troops, whose commanders had promised Monday not to use force against peaceful demonstrations, for standing by, he said.

Egypt’s health ministry reported three people were killed and 639 were wounded in Wednesday’s clashes, according to the state television network. Reported fatalities in the previous eight days of demonstrations ranged as high as 300.

In one surreal moment, whip-wielding Mubarak supporters thundered through the crowd astride horses and camels, and at least one man was pulled off his mount and beaten. A Mubarak supporter who spoke to CNN said the riders were pyramid workers who were protesting the negative economic impact of the crisis.

But some observers said the pro-Mubarak push Wednesday was likely orchestrated by a regime bent on breaking up peaceful demonstrations.