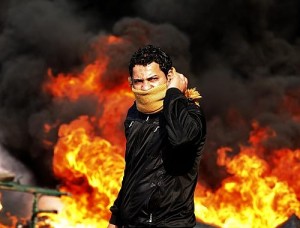 Up until this point, news outlets – including Al Jazeera – have been refraining from placing the blame of the latest violence, seen on Wednesday and early Thursday morning, directly on Mubarak. World leaders have refrained from doing so as well, although they said that it must be investigated and they hoped that it was not being orchestrated by Mubarak.

That being said, the NY Times has posted an article on Wednesday evening, which placed the blame directly on the shoulders of the Egyptian President.

The article is headlined “Mubarak’s Allies and Foes Clash in Egypt“.

President Hosni Mubarak struck back at his opponents on Wednesday, unleashing waves of his supporters armed with clubs, rocks, knives and firebombs in a concerted assault on thousands of antigovernment protesters in Tahrir Square calling for an end to his authoritarian rule.

The deployment of plainclothes forces paid by Mr. Mubarak’s ruling party — men known here as baltageya — has been a hallmark of the Mubarak government, and there were many signs that the violence was carefully choreographed.

The Mubarak supporters emerged from buses. They carried the same flags and the same printed signs, and they all escalated their actions, from shouting to violence, at exactly the same moment: 2:15 p.m. The protesters showed journalists police and ruling party identification cards that they said had been taken from Mubarak supporters who had been caught infiltrating Tahrir Square, also known as Liberation Square, and detained in a holding pen.