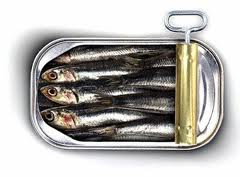 The following alert is an update to the previous article regarding sardines, which Kashrus agencies claim are infested with Anisakis Worms.

The Vaad Hakashrus of Flatbush has been researching Anisakis infestation in the stomachs of sardines. We have been testing sardines from several countries. The following position is the result of our findings and reflects our opinion on this matter:

At an Asifas HaRabbonim last night in Boro Park we opened numerous cans of sardines from Portugal and Scotland. The sardines were inspected by many Rabbonim and Kashrus experts. The sardines from Portugal were observed to be infested with Anisakis worms in the internal organs and abdominal cavity, as previously confirmed by the Vaad Hakashrus of Flatbush. Additionally, the sardines from Scotland were found to be infested as well. In our opinion the necessary cleaning process is too complicated for the layman to attempt.

Therefore it is our position that sardines from Portugal and Scotland should not be used.

It is important to note, that the majority of sardines on the kosher market are from Morocco. Extensive research on sardines from Morocco has shown them to be clean of infestation. The above research was only performed on canned sardines available in the U.S.A., and not on fresh sardines. The country of origin is printed on each package of sardines.