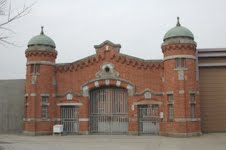 After a behind closed doors session between the defense team and the judges, proceeding opened with defense lawyer Goto presenting the court with evidence which cast aspersions on the documents submitted by Ms. Suzuki last week. Defense lawyers Honda and Ozawa then summarized the defense arguments, following by Mr. Takano who condemned Ms. Suzuki’s underhanded manner in trying to downplay the relevance of the valid polygraph tests.

Askanim visited with Yaakov Yosef after the conclusion of the hearing. Yaakov Yosef was in good spirits, and described how the detention center shook like a boat during the March 11th earthquake. Askanim also visited with Yoel Zev ben Mirel Risa Chava before the hearing in the detention center, and he also described his fear of the earthquake. Both boys displayed tremendous emuna and bitachon. Closing arguments for Yoel Zev ben Mirel Risa Chava have been schedule for May 9th.

The following was written by R’ Meilech Bindinger and submitted to YWN just a few moments ago:

R’ Aron Nezri and I arrived at 9.30 this morning at Tokyo Narita Airport after a short but inconvenient stop over in Seoul, Korea. We immediately went to Chiba Detention Centre where we visited Yoel Zev Ben Mirel Risseh Chaveh.

The visit was a short but well appreciated 20 minutes; the maximum allowed by the prison authority.

Sitting in on the meeting was a Japanese interpreter and a prison official who annotated the discussion.

During the conversation Yoel Zev commented: “I sent the Eibershter mishloach monos this Purim. I gave the Eibershter my tears, as the Heiliger Ruzhiner ztk”l did when in prison.

Yoel Zev added, “I asked in return that the Eibershter should give me mishloach monos by sending us moshiach tzidkeinu.Yoel Zev described the fear when he experienced the powerful earthquake on March 11.

Before we left we sang together and bid farewell.

We then travelled to Tokyo, and met the Defense attorneys at the Tokyo High Court.

After a brief meeting, the lawyers met with the judges at a behind doors session.

At 1.30 pm the court hearing began. The session was the closing arguments for the Appeal trial of Yakov Yosef Ben Reizel.

In attendance were defence attorneys Messrs Goto, Takano, Ozawa, Honda, Uno and Masaki. The father of Yakov Yosef as well as Rabbi Binyamin Edery, Chabad Shliach of Japan were present at the court.

After the judges entered the chamber, and the customary bows done with, the hearing began with the court appointed interpreter explaining in Hebrew to Yakov Yosef that as per the Defense teams request, the word-for-word translation into Hebrew had been waived.
This simplifies the procedure and saves much time.
The interpreter however did give intermittent brief explanations of the procedure when prompted by the presiding judge.

Mr. Goto presented to the court the very recent and shocking evidence that casts suspicion on the authenticity of documents submitted just last week to the court by Ms Suzuki.

Although these revealing documents were not formally adopted by the court since they were procured after the deadline of submitting new evidence, nevertheless they were brought to the attention of the judges, and served their duty in majorly discrediting the testimony of Ms Suzuki.

Mr Honda and Mr Ozawa later took the stand, summarising to the court all the defence arguments based on the evidential material procured during the appeal procedure.

Mr. Takano later took the stand, elaborating on the validity of the polygraph results, and condemning the under handed manner in which Ms Suzuki has tried to down play its relevance.

The court adjourned after setting the verdict date for 16th May at 2.30 pm.

After the hearing concluded, we visited Yakov Yosef at a holding cell below the court house.

Yakov Yosef was in good spirits. He related how during the earthquake on erev Shabbos March 11, the entire detention centre shook like a boat. The initial shocks and the subsequent powerful aftershocks lasted up to 2 hours.

“The entire prison was in a frenzy. Screams could be heard from all the cells. Prison staff donned protective headgear and immediately fled the building to safety. I felt like Yonah on the boat. The prison building shook violently like a boat during a gale force storm on high seas.

“Yakov Yosef added: “The gemara in Berochos daf 59 tells us, that when Jewish children are held in captivity, Hashem kaveyochol drops two tears into the ocean thereby causing an earthquake. This equates to the tsunami Japan have experienced.”

After meeting Yakov Yosef, we met with the Defense attorneys of Yoel Zev, Messrs Miyake, Nakamura, and Takano.

Final and finer details of the closing arguments scheduled for May 12th were discussed.

As far as the situation on the ground in Japan post the 11 March earthquakes, tsunami, heightened radiation levels and nuclear reactor meltdown scare: Little is evident in Tokyo itself.

One noticeable change is the strict disciplined energy-saving efforts. Due to the shut down of six nuclear reactors, on which Japan was heavily dependent. Both in the airport and court house all lighting was compromised to 50% of the usual lighting.

Please continue to Daven for the Bochurim. May they be zoche to be reunited with their families speedily.