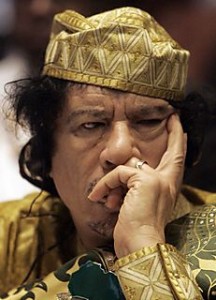 The mystery continues in newspapers around the world, with the latest by AOL News:

What if the biggest mystery surrounding Col. Moammar Gadhafi had nothing to do with his long, brutal reign as the world’s most eccentric and violent leader turned pariah?

And what if a long-lost letter from a Catholic cardinal who knew Gadhafi’s true identity was evidence that could have solved the mystery?

To many Libyan people, the biggest question mark about Gadhafi does not involve his repressive and dictatorial rule, delusional statements or brazen lies. Behind closed doors, for years, they’ve wondered if he is Jewish. Last week the issue came out in the open, as NBC’s Richard Engel reported from Libya that one in five rebels was fighting Gadhafi because he believes the leader is Jewish.

Conflicting reports surrounding Gadhafi’s birth have circulated since about 1970, two years after a Gadhafi-led coup made him the de facto leader of Libya.

In a handful of biographies from years ago, mostly written by Europeans, Gadhafi is almost always described as being born in a tent in Sirt, the son of a poor, illiterate Bedouin sheepherder and his wife.

But the hushed-up rumors in Libya about Gadhafi’s parentage involved his mother being Jewish. The stories have conflicted over the years, and the narratives are different. One had her converting to Judaism at age 9. In another, Gadhafi’s grandmother is Jewish but leaves her husband for an Arab sheik.

A more specific claim, backed up by a Libyan historian, is that Gadhafi was born out of wedlock to a Jewish woman and an Italian soldier in a village east of Tripoli. Because of the shame surrounding the birth, the baby was given to a Catholic cardinal who in turn gave the child to the sheepherder and his wife.

For decades, some Arab regimes have used hatred of Israel and Jews to deflect attention from their own shortcomings and have labeled their perceived enemies as secretly being Jewish when it suited their purposes.

Many contemporary scholars of Libya and policy experts interviewed by AOL News drew a blank when asked for more details about Gadhafi’s origins and early years.

A spokesman for the U.S. State Department’s Libya desk said it was of no concern, and the Vatican had no comment. Mohamed El-Jahmi, a Libyan-American activist who left Libya 30 years ago, said that the rumors have always been strong in Libya and that there are reasons to believe they are true.

“But I’d prefer not to talk about it,” El-Jahmi said. “It doesn’t matter if Gadhafi is Jewish or not, in the long run. What’s important is that he is evil, and he needs to go. And the Arab people need to embrace Jews and Israel if the Arab world is ever going to really grow.”

Mohamed Yusuf al Magariaf, 71, a prominent Libyan dissident now based in the U.S., investigated Gadhafi’s past for several of his books and believes much of what the dictator has told people about his origins is a lie.

During research for one of his books, Magariaf tracked down a letter he said was written years later by the cardinal whom he believes was given the infant Gadhafi and who turned him over to his Bedouin parents. Gadhafi’s mother, Aisha, reportedly died in 1978, and his father, Abu Meniar, in 1985.

The Oxford University-educated Magariaf was a professor at the university in Benghazi in 1971 when he joined Gadhafi’s cabinet and later became the Libyan ambassador to India. In 1980, he became the first diplomat to break with the regime and formed the National Front for the Salvation of Libya.

Magariaf was sentenced to death in absentia and hunted abroad for years by hit squads carrying out Gadhafi’s notorious “physical liquidation.” Six of his brothers were imprisoned in Libya, but were eventually released. A seventh brother disappeared in Libya and has never been heard from again. He is thought to be in prison or dead. Magariaf finally moved with his family to the U.S. in 1991.

He has written about 20 books, mostly in Arabic, about Libyan policy and history. In 2009 he wrote “A Coup d’Etat by an Informant,” which posits that Gadhafi was a double agent who only pretended to be a revolutionary and in fact had been an informant for the monarchy.

Magariaf is also among the many in Libya who believe Gadhafi has Jewish roots. But he mentions it only very briefly in his books and doesn’t want to be portrayed as someone whose work focuses on the issue.

A journalist named Mary Pace wrote a book last year called “Gadhafi’s Secret” in which she claims that Gadhafi should be considered Catholic because he was born to an Italian officer who impregnated a Libyan girl and then took the baby to Venice, where he was baptized at the age of 8 or 9 months.

AOL News spoke with Magariaf about what he learned about Gadhafi’s origins, including the “Da Vinci Code”-like rumors surrounding his birth.

AOL News: Why is there so much mystery surrounding Gadhafi’s childhood?

Magariaf: No one knows exactly which year he was born or exactly where he was born. Nobody knows which day or month. There are so many question marks about it. Everything the average person knows — and there isn’t much — was a story he invented.

But aren’t there people from his tribe around today who knew him back then?

This is the bizarre thing. Tribal traditions are everything in Libya, and everyone is always known by their cousins and uncles. In the case of Gadhafi, no one has ever mentioned that he is from his uncle’s tribe. Who are his uncles? For someone like Gadhafi to be so powerful, it would be normal for his uncles to come out and say he is our nephew. Gadhafi never mentions his uncles.

How legitimate are the reports that have circulated for years in Libya that Gadhafi has Jewish roots — especially the one where he was born out of a wedlock to a Jewish girl and an Italian soldier?

There have always been rumors in Libya about this. But then came two facts. In the early 1970s, the Italian newspaper Oggi published a story saying Gadhafi was born to a Jewish mother. I have no idea why or where it came from.

In 1973, Gadhafi told two journalists who were interviewing him for a local Libyan magazine called Al Blagh that he had some cousins of Jewish background. One of the cousins was born to a Jewish mother. This cousin, who has since died, looks very much like him. But Gadhafi retracted the line about his Jewish cousin, and it was never published in the magazine. I interviewed one of the journalists, Ahmed Dajani, in 1980, and he confirmed all this.

The born out of wedlock to a Jewish girl story sounds a little apocryphal. Do you believe it, or was it to make Gadhafi look bad in Libya?

What I know comes from my own investigation. First, I want to say that Gadhafi’s Jewish roots are a very sensitive subject. I don’t mention them because I hate Jews or because I hate Gadhafi. I hate what he has done, not the man himself. And my books are not focused on the subject of whether Gadhafi is Jewish. It’s about telling the world the truth about all his lies.