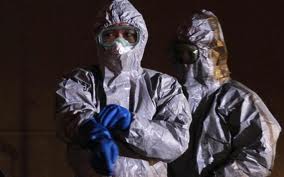 Workers at the disaster-stricken Fukushima nuclear plant in Japan say they expect to die from radiation sickness as a result of their efforts to bring the reactors under control, the mother of one of the men tells Fox News.

The so-called Fukushima 50, the team of brave plant workers struggling to prevent a meltdown to four reactors critically damaged by the March 11 earthquake and tsunami, are being repeatedly exposed to dangerously high radioactive levels as they attempt to bring vital cooling systems back online.

Speaking tearfully through an interpreter by phone, the mother of a 32-year-old worker said: “My son and his colleagues have discussed it at length and they have committed themselves to die if necessary to save the nation.

“He told me they have accepted they will all probably die from radiation sickness in the short term or cancer in the long-term.”

The woman spoke to Fox News on the condition of anonymity because, she said, plant workers had been asked by management not to communicate with the media or share details with family members in order to minimize public panic.

She could not confirm if her son or other workers were already suffering from radiation sickness. But she added: “They have concluded between themselves that it is inevitable some of them may die within weeks or months. They know it is impossible for them not to have been exposed to lethal doses of radiation.”