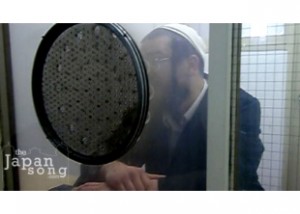 I can now confirm that Yoel Zev is b”h airborne.

We were nervous in the half hour prior to flight departure. Yoel Zev had not arrived yet at the boarding gate. After some frantic high-level phone calls it was confirmed to us that he is checked-in, albeit not yet to be seen.

Approximately 5 minutes before scheduled departure time, Yoel Zev arrived at the aircraft and boarded alongside Aron Nezri who was agitatedly awaiting his arrival.

Aron passed his cell phone to Yoel Zev. We conversed for a few brief moments. I was so relieved that this moment had arrived and elated to hear Yoel Zev’s voice.

Some quotes from our conversation (translated from Yiddish):

Me: Yoel Zev, you got us real nervous, coming so late…, where were you?

Yoel Zev: I arrived to the airport at 8am. I was held at the immigration detention cell where I davened Shachris, and I was only taken a few minutes ago to the flight, where I boarded together with Aron (Nezri).

Me: It’s absolutely amazing to speak to you now, sitting on the airplane heading home. With a 99.8% conviction rate in Japan, your acquittal was against all odds. An absolute miracle. How do we thank enough?

Yoel Zev: (emotionally) Boruch Matir Asurim. In a time of yeshuas H-ashem, the gates of heaven are wide open, It is now an auspicious time to daven for my friend Yakov Yosef ben Reizel who remains in Japan and awaits salvation.

Yoel Zev: I’m now about to eat the first certified kosher food since I arrived in Japan three and a half years ago. Boruch Atah … Shehakol Niheyeh Bodvoroi.

I can also confirm receiving a photograph of Yoel Zev, aboard the home bound flight, smiling contentedly, with a sefer on his armrest.