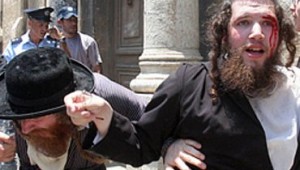 Unfortunately, the girls attending the Orot Girl’s School in Beit Shemesh are not having an easy time due to the determination of area hoodlums, who insist they represent the chareidi community. The opening of the school year was under a veil of threats, accompanied by a significant police presence, with Beit Shemesh Mayor Moshe Abutbul trying to play the middle road, but favoring the chareidi claims to the building.

In the latest round of violence, hundreds of chareidim protested on Tuesday night outside the school, insisting it has no place on the border of the chareidi community. This despite the fact that the school is frum, and the girls are modestly dressed, from Shomer Shabbos homes, simply not chareidi [enough].

Kikar Shabbat reports that rabbonim supporting the protest include Rabbi Natan HaCohen Kupshitz, the rav of the Nachlat U’Menucah neighborhood; Rabbi Yehoshua Rosenberg (member of Badatz Eida Chareidit and rav of Kiryat Rama); Rabbi Meir Vigdor and Rabbi Meir Heller. The protest began with the recitation of slichos. Parents affiliated with the school are planning a counter protest.

During the protest, members of the press were targeted by chareidi youths, who also shouted vulgarities as well as spitting at them. There was a measure of pushing and shoving and once again, the event got rowdy.

It appears the chareidi objection to the school is gaining momentum and while City Hall tries to remain silent, it is clear that this protest venue is just getting underway and the zealots will continue until their objective is achieved.

With Rosh Hashanah a week away, today (Sept. 21), a day when Israel’s sworn enemies take a giant step towards realizing their dream of wiping Israel off the map, there are those among the frum community who appear to have an inability to set priorities and address pressing issues in a non-violent fashion. From Meah Shearim to Beit Shemesh, tolerance and respect seem to be rapidly vanishing commodities.