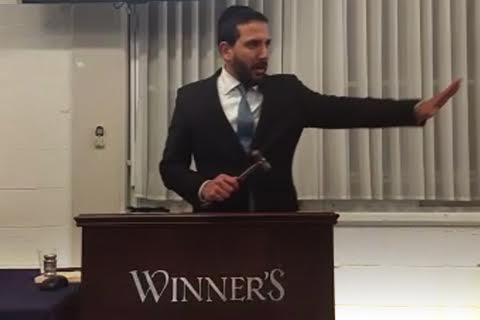 A letter of recommendation in the handwriting of Rabbi Naftali Trop, Rosh Yeshiva of Radin, for a student of the Radin yeshiva “Who has been forced to leave due to the severity of his condition”, is currently up for auction in “Winner’s” Auction House.

The letter is rare because Rabbi Naftali rarely wrote, as it was difficult for him to do so, and no letters from him exist.  In the foreword to Chiddushei HaGranat HaShalem [published by Machon Orayta], the famous author R.M.M. Gorelitz writes: “As we have written, it was hard for our Rabbi to write, and we were unable to locate any of his handwriting apart from the end of this short letter…” (page 28, comment 61).

Due to its rarity, the letter’s opening price is 4000 dollars, and Winner’s Auction House estimates that the letter, which was written in 1924 and signed with the yeshiva’s stamp, is expected to sell for the sum of between 6000 and 8000 dollars.

In the upcoming auction, among other things, Winner’s are auctioning:
A letter with the handwritten signature of the founder of the Tolna Chassidut, Rabbi David Tolna.
An unusually rare letter regarding the rabbinate of Admor Yoel Teitelbaum of Satmar, from
Rabbi Shalom Eliezer Halberstam of Ratzfert, son of Rabbi Chaim of Sanz, 1930.
An unkown response from Rabbi Yosef Shaul HaLevi Notenhausen, Av Beit Din of Lemberg, author of “Sho’el U’Meishiv.” Lemberg, 1866.
A first edition of the important book of Chassidut ‘Maor Einayim’.
A first and extremely rare edition of the book of one of the students of the Vilna Gaon ‘Gaviei Gavia HaKesef’.
An 18 th century Illustrated Italian Ketubah and many more rare and special items.

Winner’s Auction House have been conducting public auctions for over 30 years, and are considered one of the leading companies in the world in the fields of ancient Hebrew books, manuscripts and Judaica objects.
The auction catalog, along with the results of previous auctions, can be viewed on the website – winners-auctions.com.
The auction will be broadcast in real-time on the website and needs pre-registration on the website to participate. Good luck.