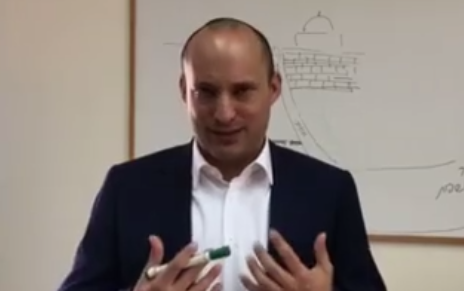 Bayit Hayehudi party leader Naftali Bennet, viewed as a friend of Conservative and Reform Jewry, finds himself in a difficult situation after the cabinet voted on Sunday to freeze the situation, safeguarding the religious status quo and resulting in the de-facto end of hopes for the egalitarian prayer area at Robinson’s Arch. He has therefore posted a video on Monday, 2 Tammuz, explaining the events as he views them.

He explained in the past, Jewish Agency Director Natan Sharansky put forward the idea of an egalitarian prayer area by the ‘Kotel Daromi’ but nothing was ever actualized. He adds that in his capacity as Minister for Jerusalem Affairs, exactly four years ago, he allocated an area by the Kotel Daromi called Rechava Yisrael (Israel Plaza) which was built in the quiet of night, still standing, and offering a nice venue for egalitarian prayer for those wishing it even today. “This is called the first compromise” Bennet explains.

He goes on to explain that the state told the High Court this is the interim compromise, to be followed by the Mandelblit plan – to increase the area with access from the Kosel Plaza, giving it additional prominence. This was passed by the government but on Sunday, due to pressure from the chareidi parties and in part Bayit Yehudi, “We return to compromise number one and anyone wishing egalitarian prayer, has it today”.

Bennet adds even in his own party there are those who are against it, including Minister Uri Ariel and MK Betzalel Smotrich, “and this is legitimate”.

Bennet concludes in essence, “We are back to decision one”, adding the High Court will decide if the current arrangement is acceptable or if the government will be compelled to return to the current status quo, “Which is not the tragedy of generation” and anyone can daven in the area “but the Reform and others did not receive what they expected to”.