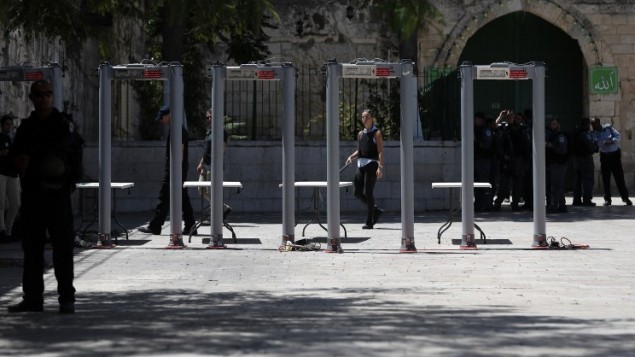 It’s not about metal detectors. And how ridiculous that I should even have to say that.

A child watching Sesame Street knows when things are upside down. Children learn the basics of gravity and even proxemics at a fairly young age. They understand that there’s a certain amount of space that one must place between themselves and, say, a fire… or a dog that’s baring its teeth.

Sadly, most Israelis have these basics internalized as well, but they have been forced to live in a reality where many things are upside down.

Case in point: The situation now facing Israel, its citizens, and the many people who visit there is so far removed from the recent installation of metal detectors at the entrance to the Temple Mount that it’s absurd to even suggest that this recent cause célèbre has any impact on what’s occurring in the Middle East. The metal detectors are merely the latest excuse.

The presence of metal detectors at the Temple Mount is just another excuse to shed blood. Why? Because Israel’s enemies live in a chasm of fake news and false motives.

Metal detectors weren’t suddenly installed to insult anyone. They were installed because two Israeli policemen were murdered, shot in the back by assassins who ascended the Temple Mount ostensibly to pray. And then turned and fired.

These metal detectors were recently installed to protect people—all people.

So how does Mahmoud Abbas react? How does King Abdullah of Jordan react? Publicly, their reactions imply to their people—and to the rest of the world—that Israel, “the Zionist enemy,” has perpetrated the unthinkable upon the Muslim people. These Arab leaders have abandoned the avenue of civil discussions and diplomatic relations and instead opted to incite “days of rage.”

Rage. That is the edict from the so-called moderate leaders of the Arab world. These are the men who say they want peace for their people, peace for the region.

Hamas and their ilk, the overt terror organizations, make no secret of their means nor the ends they seek. By contrast, Abbas and the Jordanian King are more polished and, consequently, somewhat more dangerous. Why? Because they hold out the promise of peace; they proffer the gift of life without terror, which all Israelis and civilized peoples hope and pray for. For the small price of trust, they say, “we promise to bestow the precious gift of peace upon a generation weary of terror and war.”

Timeo Danaos et dona ferentes. Beware of friends bearing gifts. Because with friends like these…

[Dov Hikind is a NY State Assemblyman, a Democrat from Brooklyn]