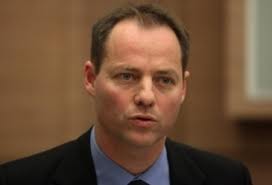 As tensions increase between the chareidi and secular politicians surrounding the recommendations of MK Yochanan Plesner and the defunct Plesner Committee, the chareidi media is working overtime to cover the events in-depth and digging deep to find the dirt.

The Merkaz Inyanim newspaper did some checking into the background of Plesner, the man behind the committee, the champion of the “share the burden camp” and reports that the MKs father was not a Jew, but a Catholic from Denmark, a descendent of priests and bishops. The paper reports the MKs parents were married in a church.

“Only a person in whose veins flows mixed blood could be behind the effort to destroy limud torah, that which watches over and protects the Jewish People throughout the ages” the newspaper writes.

Hamodia joined in today, Tuesday 20 Tammuz 5772 in a piece carrying the headline “The Son of a Christian Comes Out of the Bag”.

“Only the son of a goy, those following the Christians and ‘that person’ that embittered the lives of Jews is capable of compiling the Plesner Committee recommendations. Only the one whose veins carry the mixed blood, including the blood of one whose heart is true to the cross that served the enemies and murderers of Jews over the ages is capable to accept such a mission, to attack toras yisrael”.

“As it turns out, in Plesner’s blood is that awful historical animosity that led the followers of Christianity to the brutal horrific crusades against the Jewish People…”

Hamodia continues with a call to “the Jewish People, all those who fathers are Jewish” to demand the dismissal of Plesner from any and all dealings concerning bnei torah and their commitment to learning. “He has absolutely no right to judge them. He is the last who has a right to undertake this issue”.

It should be pointed out that not all are in agreement, and journalist Nati Tucker on his Facebook page laments the opinion pieces against Plesner for he feels the chareidim have reached a new low, yellow journalism, and they should address the issue at hand rather than seek to level a personal attack him.