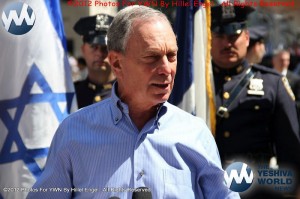 “We have an obligation to keep people alive and safe and the courts have held that up repeatedly,” Bloomberg said yesterday at a press conference.

“There are certain practices that doctors say are not safe and we will not permit those practices to the extent that we can stop them. You don’t have a right to put any child’s life in danger, and this clearly does.”

His comments came in response to Orthodox rabbis who defended the controversial practice of “metzitzah b’peh” at a New York City Health Department public hearing this week. During the ritual, a mohel uses his mouth to suck blood from the circumcision wound, which has led to the transmission of herpes to some infants, in a few cases leading to their deaths.

One mohel, Rabbi A. Romi Cohn, defended the practice, saying rabbinical law guidelines are “much stricter than the medical profession,” though he admitted some people without training as required by rabbinical law pose as mohels to make money, a practice he strongly condemned.