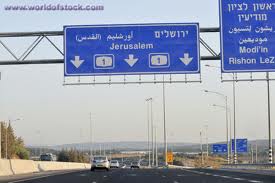 You may have noticed over recent weeks, buses traveling on the Jerusalem-Tel Aviv Highway between Shar HaGuy and the capital are crawling behind slow moving trucks when in the past they would pass such vehicles. This is because beginning on July 11, 2012, a new directive from the Ministry of Transportation went into effect.

In the past, commercial trucks weighing over 4 tons were prohibited from passing on that stretch of roadway. Until July 11th, this did not include buses but now it does, compelling bus drivers to sit in the right lane behind trucks that climb the hills into the capital at a slow speed. While sign 422 used to only refer to commercial vehicles, the word ‘commercial’ has been removed, now including buses.

Bus companies were quick to warn drivers of the amended sign, which now includes them, adding to the time of a bus trip from Tel Aviv to the capital.