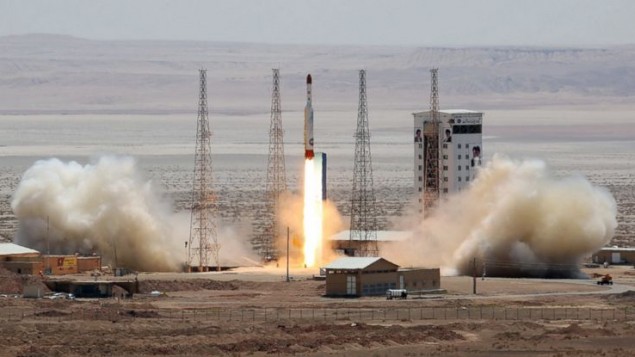 It was not too long before Rosh Hashanah that officials in the Trump administration signaled they may not comply with the agreement signed by the Obama administration and Tehran. These words were met by an Iranian response, warning the new administration doing so would result in Washington’s loss of credibility in the international community.

If we move ahead just a bit, to Shabbos, 3 Tishrei 5778, we now face a new reality, a brazen Iranian move, the firing of a ballistic missile capable of carrying multiple warheads, a missile that was just revealed to the international community on Friday, during a military parade in Tehran.

The Khorramshahr missile has a range of 1,250 miles (2,000 kilometers) and can carry multiple warheads, according to Press TV.

“The Khorramshahr missile has become smaller in size and more tactical and it will be operational in the near future,” the broadcaster said. The new missile places Israel within range, as well as American bases in Saudi Arabia.

Iran just test-fired a Ballistic Missile capable of reaching Israel.They are also working with North Korea.Not much of an agreement we have!

President Hassan Rouhani spoke during the parade, telling the world Tehran is strengthening its defense capabilities, adding “…Whether you like it or not we are going to help Syria, Yemen and Palestine, and we will strengthen our missiles.”

The firing is the second launch of a ballistic missile by Iran in the last month and US Ambassador to the United Nations Samantha Power announced the video footage of the launch released by Iran is being verified. The ambassador added if the launch is confirmed, the matter will be taken to the UN Security Council.

In his address to the UN General Assembly in NYC on Tuesday, Prime Minister Binyamin Netanyahu said, “We must speak the truth about Iran”, explaining “Iran continues to vow to destroy my country every day”.

The prime minister added, President Trump rightly called the nuclear deal with Iran, he called it an embarrassment. Well, I couldn’t agree with him more. And here’s why: Iran vows to destroy my country every day, including by its chief of staff the other day. Iran is conducting a campaign of conquest across the Middle East and Iran is developing ballistic missiles to threaten the entire world.

“Two years ago, I stood here and explained why the Iranian nuclear deal not only doesn’t block Iran’s path to the bomb, Iran’s nuclear program has what’s called a sunset clause. Let me explain what that term means: It means that in a few years, those restrictions will be automatically removed – not by a change in Iran’s behavior, not by a lessening of its terror or its aggression. They’ll just be removed by a mere change in the calendar. And I warned that when that sunset comes, a dark shadow will be cast over the entire Middle East and the world, because Iran will then be free to enrich uranium on an industrial scale, placing it on the threshold of a massive arsenal of nuclear weapons.

“Now, in the last few months, we’ve all seen how dangerous even a few nuclear weapons can be in the hands of a small rogue regime.

“Now imagine the danger of hundreds of nuclear weapons in the hands of a vast Iranian Islamist empire, with the missiles to deliver them anywhere on earth.

“I know there are those who still defend the dangerous deal with Iran, arguing that it will block Iran’s path to the bomb.

“Ladies and gentlemen,
“That’s exactly what they said about the nuclear deal with North Korea, and we all know how that turned out. Unfortunately, if nothing changes, this deal will turn out exactly the same way.

“That’s why Israel’s policy regarding the nuclear deal with Iran is very simple: Change it or cancel it, fix it or nix it. Nixing the deal means restoring massive pressure on Iran, including crippling sanctions, until Iran fully dismantles its nuclear weapons capability. Fixing the deal requires many things, among them inspecting military and any other site that is suspect, and penalizing Iran for every violation. But above all, fixing the deal means getting rid of the sunset clause.

“And beyond fixing this bad deal, we must also stop Iran’s development of ballistic missiles and roll back its growing aggression in the region. I remember we had these debates. As you know, I took a fairly active role in them. And many supporters of the nuclear deal naively believed that it would moderate Iran. It would make it a responsible member, so they said, of the international community.

“Well as you know, I strongly disagreed. I warned that when the sanctions on Iran would be removed, Iran would behave like a hungry tiger unleashed, not joining the community of nations, but devouring nations, one after the other. And that’s precisely what Iran is doing today.

“ From the Caspian Sea to the Mediterranean, from Tehran to Tartus, an Iranian curtain is descending across the Middle East. Iran spreads this curtain of tyranny and terror over Iraq, Syria, Lebanon and elsewhere, and it pledges to extinguish the light of Israel.

“Today I have a simple message for Ayatollah Khamenei, the dictator of Iran: The light of Israel will never be extinguished…

“But I also have a message today for the people of Iran: You are not our enemy; you are our friends. Shomaah doosteh mah hasteed [You are our friends]. One day, my Iranian friends, you will be free from the evil regime that terrorizes you, hangs gays, jails journalists, tortures political prisoners, and shoots innocent women like Neda Sultan, leaving her choking on her own blood on the streets of Tehran. I have not forgotten Neda. I am sure you haven’t too.

“And when that day of liberation finally comes, the friendship between our two ancient peoples will surely flourish once again.

“Ladies and gentlemen,
“Israel knows that in confronting the Iranian regime, we are not alone. We stand shoulder to shoulder with those in the Arab world who share our hopes for a brighter future. We’ve made peace with Jordan and Egypt, whose courageous President Abdel Fattah a-Sisi I met here last night. I appreciate President a-Sisi’s support for peace, and I hope to work closely with him and other leaders in the region to advance peace…”