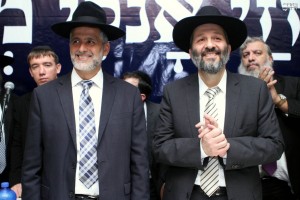 As predicted would be the case, the members of Shas’ Moetzas Gedolei HaTorah last week announced the party list for Knesset, and Eli Yishai remains in first place.

Aryeh Deri, who holds the second slot, told Channel 1 TV’s Election Headquarters (מטה בחירות) program on motzei shabbos, the eve of 25 Kislev 5773, that he wanted the 15th slot, seeking to exhibit a total lack of concern for the significance of the list position as well as saying “I wanted to show a message that I am confident that we will get many seats in the elections”.

YWN-ISRAEL reported last week that Deri sent Maran HaGaon HaRav Ovadia Yosef Shlita a letter stating he does not want the first slot, which most felt he was not going to receive in any event.

The third position on the Shas list was given to Ariel Atias.