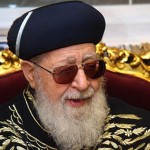 Maran HaGaon HaRav Ovadia Yosef Shlita, 92, was rushed to a hospital on shabbos after suffering “a cerebral incident”. The rav was in the midst of shachris when he felt ill and according to some reports, collapsed. Ichud Hatzalah and Magen David Adom responders were on the scene in a matter of minutes.

The rav was taking part in morning tefilla in the shul in his Kablan Street home in the Har Nof section of the capital. He was taken to Hadassah Ein Kerem Hospital. He will remain under observation for a number of days.

On motzei Shabbos, the condition of the Gadol Hador is described as stable and the rav is conscious and alert.

19:05:
The following update is provided by Walla News:
Dr. Yuval Weiss, director of Hadassah Ein Kerem reported a short time ago that Rav Ovadia is alert oriented and communicating with visitors. The Gadol Hador did have a very minor stroke and since arriving earlier in the day, he has undergone a barrage of medical exams. He should be released from the hospital in the coming days.

19:14:
Aryeh Deri told Channel 2 News that he walked to the hospital on Shabbos and he spoke with the rav quite a bit and he is doing well Baruch Hashem, adding “remember, he is not young and he did have a stroke, albeit a minor one but a stroke.” Deri added “doctors say the damage from the stroke was as minimal as possible based on results of the tests as well as the rav’s response to me and the other visitors.”