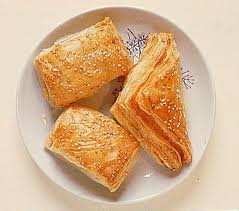 Chief Rabbinate of Israel kashrus officials met recently in an effort to create a uniform standard for consumers who are becoming confused regarding the shape of burekas. In the past, not too long ago when the burekas filling menu was more limited, everyone knew that dairy burekas were triangular and parve potato burekas were rectangular. Today, there are so many varieties and the standardized shapes seem to have disappeared. The Rabbinate officials add that there are consumers sensitive to dairy, and the confusion has resulted in allergic reactions in some cases. Obviously the confusion has led to too many complaints from kosher consumers, who learned the parve burekas they heated up was cheese filled.

The rabbonim are also concerned with relaxed regulations in some bakeries regarding the separation of trays and utensils between daily and parve products.

Rabbi Chaggai Bar-Giora, who oversees industrial production is working to bring back the standardization, explaining his office receives a growing number of complaints from kosher consumers who bought burekas and were alarmed to learn what they thought was dairy was actually parve of visa versa.

The Rabbanut is working to restore the old tradition, that triangular burekas will be dairy, cheese filled; and rectangular parve. They also addressed the round and finger shaped burekas which today are commonplace in the marketplace.

Attending the meeting were a number of bakery owners from the larger companies who are working with the Rabbanut towards standardization. One suggestion is that regarding the finger burekas; the closed ended types would be parve and the open ones daily, permitting consumers to see the cheese filling. Parve filo burekas would be round and the dairy filled triangular. Regarding cigars the extra long ones would be dairy as opposed to the parve ones, standard length.

The Chief Rabbinate will in the future release its new standard for the benefit of the general publi, to facilitate identification of the product by consumers.