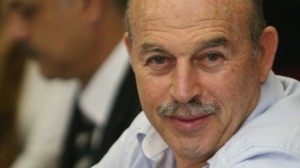 MK (Bayit HaYehudi) Nissim Slomiansky is under investigation for allegedly paying $50,000 for an agent to bought votes for him. This is how police believe he landed such a high place on the party’s list, the first available slot in the primary race, the third place on the party lineup behind Naftali Bennett and Uri Ariel. The first two slots were locked in so in essence, the member of the NRP old guard beat out all other contenders in the primary race.

Slomiansky told Channel 2 News that he is a veteran in Knesset and his integrity is above reproach, rejecting the allegations against him as baseless. Some point out that Slomiansky, who represents the National Religious Party’s old guard, surprised his colleagues as he landed the highest slot ahead of popular new generation MKs including Uri Orbach.

Police explain they have evidence that David Ezra was hired to pay registered party members to vote for Slomiansky. The veteran MK explains the audio tapes against him are not entirely conclusive; relying on a Channel 2 investigation which he says supports this contention.

Also allegedly involved was Avichai Amrusi, who runs a Netanya yeshiva. Police allege that some of the money went to the voters, some to the agents and the remainder to the mosdos they are affiliated with. Police indicated $50,000 in cash was handed over inside cigarette boxes. According to Amrusi, Naftali Bennett was directly involved as Channel 10 video at the end of the article shows.

In a telephone interview with Channel 2 TV News on Tuesday, 16 Adar 5774, Slomiansky stated that he does not believe Bennett was involved in trying to frame him in any way shape and form, pointing out Bennett’s spot was secure as party leader so there is no reason for him to act in this way. “They can check all my bank accounts and I will cooperate with police in any and every way possible. I hope this happens soon so I can put this aside and move ahead. I am innocent and those who know me are aware of this.”

Slomiansky added most party colleagues called him to give him a chizuk in light of the news of a police investigation against him.

The Channel 10 report does indicate that 4,000 eligible voters were persuaded to cast their ballot for Slomiansky, explaining that cost 160,000 and an additional sum was given to the yeshiva. It also explains the money was placed in packs of Marlboro cigarettes, in cash. The video also shows Amrusi speaking on video, not just audio.

One can see Amrusi change his story from the beginning of the Channel 10 report and the videoed portion. One change is that he first spoke of $50,000 and then changed it to $20,000. Baruch Kra’s report states with certainty that Bennett is involved.

The Channel 2 report addresses a report that veteran NRP official Zevulun Orlev, who lost the party leadership race to Naftali Bennett, has reported he is being followed of late. The accusations point to Naftali Bennett and former Bayit Yehudi leader Rabbi Daniel Hershkowitz, both denying any involvement in such activities.

Bennett in his response to the Channel 10 report calls it “rechilus,” denying allegations that he hired private investigators.

In order for police to question Slomiansky ‘under warning’ they will first have to receive permission from the Knesset speaker.