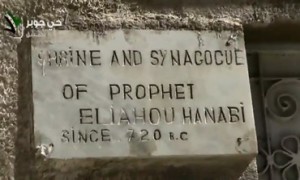 The Eliyahu HaNavi Shul near Damascus has survived the recent bombings in the area in the ongoing civil war in that country. According to a Yated Neeman report, a film recently released by rebel forces showing the damage in that area shows the shul is still standing.

The video shows the significant destruction in that area, but the shul remains Baruch Hashem.

Click HERE to watch this video, which has been loaded in the YWN Video section, found at the top of the homepage. Dozens of new videos are added each day.