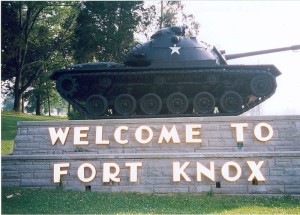 A man who worked as a civilian Army employee was shot to death on Wednesday in a parking lot at the Fort Knox U.S. Army base in Kentucky in an incident that prompted a security lockdown there, officials said.

Authorities said the shooting was “not a random act” and the shooter remained at large on Wednesday night.

The shooting, which came less than two weeks after a U.S. Marine shot dead two colleagues at a Virginia base, occurred on Wednesday afternoon outside the U.S. Army Human Resources Command headquarters, the Army said in a statement.

The victim, an employee of the Army Human Resources Command, was transported by ambulance to Ireland Army Community Hospital, where he was pronounced dead, the Army said.

“Special Agents from the U.S. Army Criminal Investigation Command are investigating a personal incident and not a random act of violence,” Chris Grey, spokesperson for the independent Army investigative agency, said in the statement.

Fort Knox’s gates were locked down to all inbound and outbound traffic as a standard security measure, the Army said. The main gate was reopened an hour later.

Mary Trotman, an FBI spokeswoman in Louisville, said two agents were sent to Fort Knox to assist with the probe.

The Army said police were “interested in speaking” with a man who may be using a black Yamaha motorcycle for transportation.

Police in surrounding jurisdictions had earlier been asked by Fort Knox officials to be on the lookout for a man driving a four-door brown car with tinted windows who may have driven off the base, said Bryce Shumate, spokesman for the police department in nearby Radcliff.

The name of the dead man is being withheld until 24 hours after family notification.

The incident came less than two weeks after a U.S. Marine shot two colleagues to death at the Marine Corps base in Quantico, Virginia, before killing himself.

In February, local media reported that a soldier and his wife died of gunshot wounds at their home on the base in what the Army said appeared to be the result of a domestic dispute.