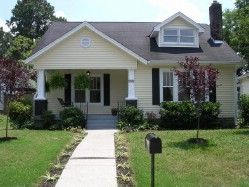 U.S. home prices jumped in February by the largest amount in seven years, evidence that the housing recovery strengthened ahead of the all-important spring-buying season.

Home prices rose 10.2 percent in February compared with a year earlier, CoreLogic, a real estate data provider, said Wednesday. The annual gain was the biggest since March 2006. Prices have now increased on an annual basis for 12 straight months, underscoring the recovery’s steady momentum.

The gains were broad-based. Prices rose in 47 of 50 states and in all but four of the nation’s 100 largest metro areas. Delaware, Alabama and Illinois were the only states to report price declines.

An increase in home sales has helped lift prices. In February, sales of previously owned homes reached the highest level in more than three years. Still, much of the demand has come from investors. Sales to first-time buyers remain below healthy levels.

Another reason prices are rising is the supply of available homes for sale remains extremely low. In January, it reached a 13-year low.

The supply of homes for sale did rise in February for the first time in 10 months. That suggests more people are gaining confidence in the housing recovery, which could help ease supply concerns and drive sales higher in the coming months.

The price gains were concentrated in the West, according to CoreLogic. The states with the biggest price gains were Nevada, where prices rose 19.3 percent, followed by Arizona, with 18.6 percent, and California, with 15.3 percent.

The cities with the biggest gains were Phoenix, Los Angeles, Riverside, Calif., Atlanta and New York.

Nationwide, home values were still down more than 26 percent from their peak in April 2006 through February, CoreLogic said.

Steady increases in prices help fuel the housing recovery. They encourage some homeowners to sell homes and entice some would-be buyers to purchase homes before prices rise further.