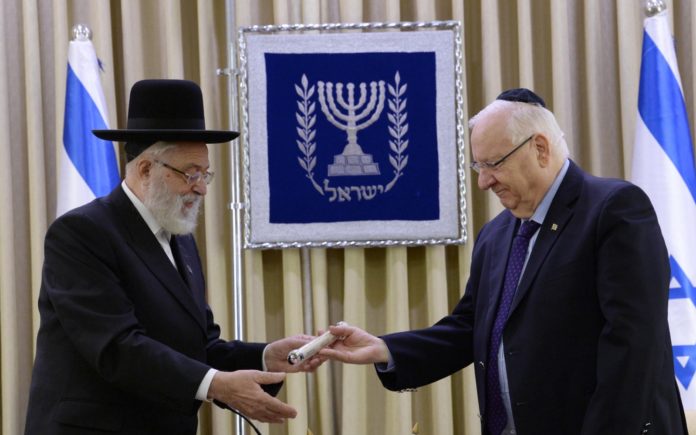 10th of Tevet – In a moving and unique event in the Presidential Residence in Jerusalem, with the participation of the President of Israel, Reuven Rivlin, the Chief Rabbi of Tel-Aviv/Jaffa, the Gaon Rabbi Yisrael Meir Lau, shlita, the Vice Minister of Health Rabbi Yaakov Litzman, the Chairman of  Yad Vashem, Avner Shalev, the heads of Ginzach Kiddush Hashem and guests from all over the world, marked the laying of the first cornerstone for the permanent building for “Ginzach Kiddush Hashem”, which will be erected in Bnei Brak to perpetuate the memory of the holy martyrs of the Holocaust and of Jewish heroism during the Holocaust. 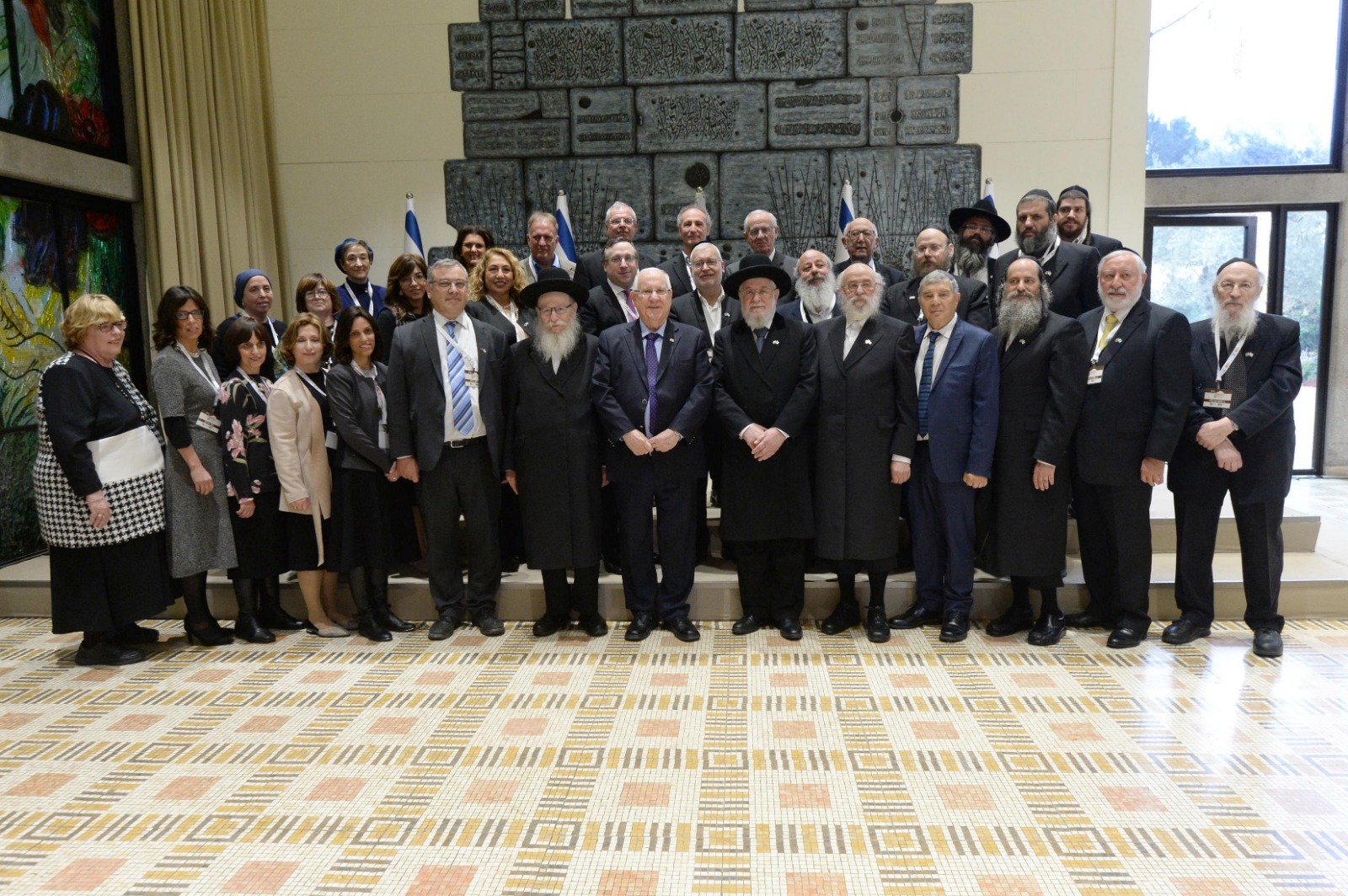 The President of Israel opened by saying that during the past Hannukah holiday he lit candles together with Holocaust survivors, and the lighting was done on the Hannukah Menorah that was redeemed and remains a memorial to the Jewish community of the village Sompolno in Poland.

“Jews guarded their Jewish identity and in the camps and ghettoes did all that was in their power to light candles of Hannuah from a shoelace and oil from toothpaste while endangering their lives only in order to fulfill the mitzvot of the holiday. We were told how the Jews recited the Brachah of Shehechiyanu with courage and spirit even though that they were in that terrible place, in the valley of death.”

He continued, “When we hear the stories of the courage of those Jews we learn what is real courage and what is faith.” The President praised the people of “Ginzach Kiddush Hashem” who work throughout the years to strengthen the awareness among the youth and to prevent any forgetting or denial of the events that befell the Jewish nation during the Holocaust. ”

The Chief Rabbi of Tel Aviv/Jaffa, the Gaon Rabbi Yisrael Meir Lau, shlita, said “There are many millions that lost their lives in the fires of the concentration camps and nothing remains from them however many did survive and despite that they survived their spirit  was broken, the tradition from the house of their fathers and grandfathers was taken from them, Faith distanced from them, and they remain like a plain in the desert.

We must remember all of them. We must continue and act and to plant the spirit that was taken from them, to perpetuate their tremendous acts that holy martyrs of the Holocaust did in their fight to guard their Jewish identity and their faith and trust in that most terrible place, the concentration camps and the ghettos.” 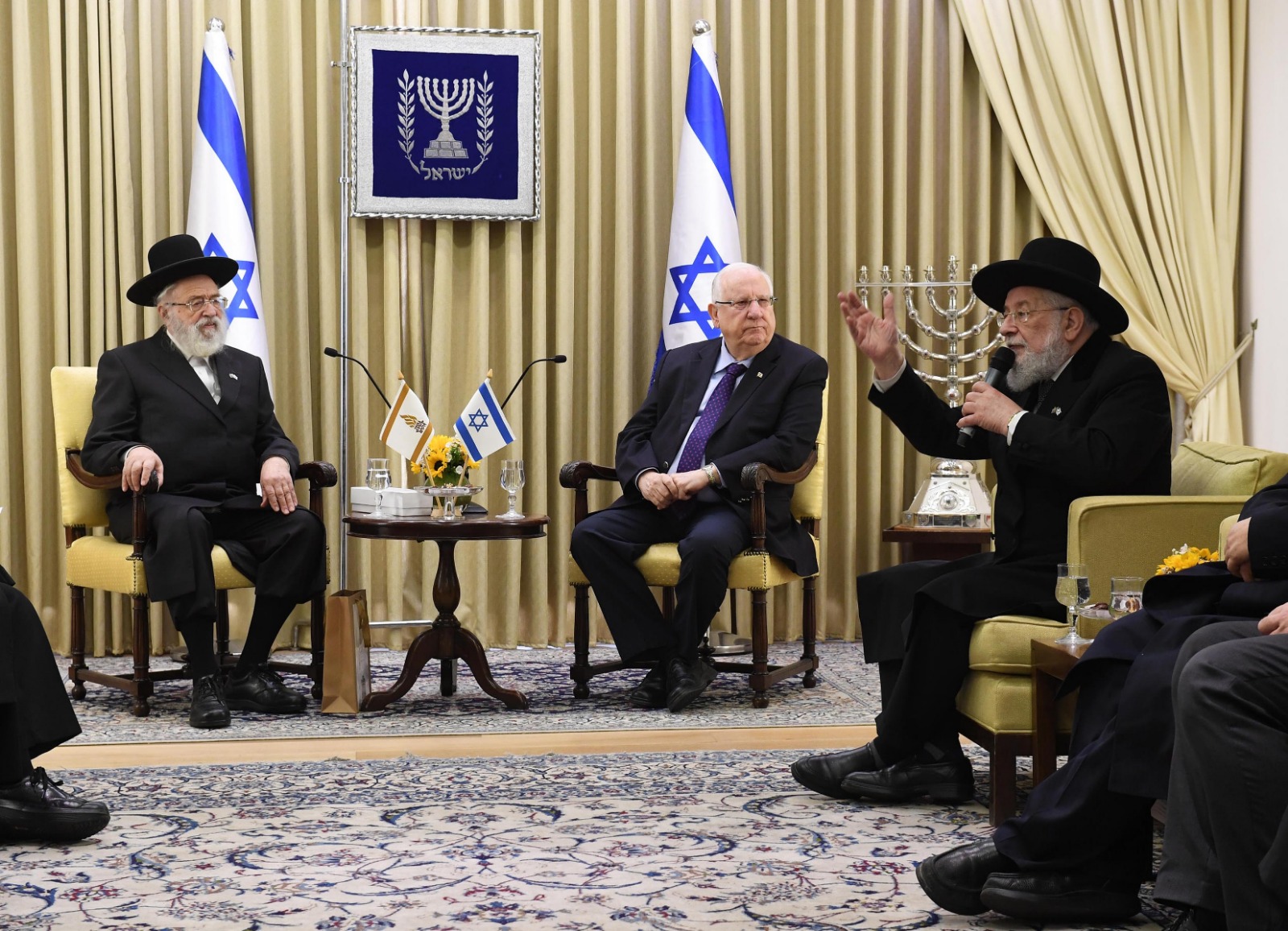 The Vice Minister of Health, Rabbi Yaakov Litzman, said that today there are new generations in the world that do not know of the Holocaust and tend to forget what happened to the Jewish nation therefore the so important activities on perpetuating the memory of the fight about the Jewish identity in the camps is important and necessary for the coming generations.

“We are marking the permanent building that Ginzach Kiddush Hashem is erecting which will show how the synagogues looked during the time of the Holocaust and are no longer, seeing the Halachic rulings during the Holocaust, Responsa with rabbis in the concentration camps and many other Jewish topics to remember all that they did to guard over Torah and Mitzvot even during those difficult days. Therefore it is important and necessary that there should be a permanent place for the “Ginzach” and we bless them for this.”

The Chairman of “Yad Vashem”, Avner Shalev, said that Yad Vashem and Ginzach Kiddush Hashem work together in order to perpetuate the memory of the Holocaust. “I remember the founder of the Ginzach” Rabbi Moshe  Prager, in the first days when they wanted to present the worldly outlook of Torah and spirituality of the survivors of the Holocaust from the religious and Haredi sectors and those who keep the mitzvot and how much he wrote on the topic.

There is significant importance to presenting the worldly outlook and the approach of Klal Yisrael, therefore founding a permanent building for this is so important and proper to the continuation of the great work of “Ginzach Kiddush Hashem” and we will continue to act together for this lofty and important goal of remembering the Holocaust and the martyrs.”

Rabbi David Skolsky, Chairman of Ginzach Kiddush Hashem presented to the President, Mr. Reuven Rivlin, at the end of the ceremony the ‘Scroll of the Holocaust’ that was written by the founder of the Ginzach,  Rabbi Moshe Prager, and said that this is a historical day in that we are marking the foundation of the permanent building that will work towards this important work for our generation and for generations to come.

At the end of the ceremony the General Manager of Ginzach Kiddush Hashem, Rabbi Tzvi Skolsky said that this is the beginning of a series of events that will take place throughout the world in order to mark the erection of a permanent building for the Ginzach.

“We will work in order that always the nation of Israel and the holy martyrs will be remembered and that though they were in concentration camps of destruction and ghettos, and in great danger to their lives they did all that was in their power and spirit in order to guard Torah and Mitzvot  and we will perpetuate this also for the coming generations.”