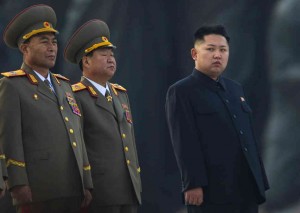 North Korea has moved two short-range missile launchers to its east coast, apparently indicating it is pushing ahead with preparations for a test launch, a South Korean news agency reported on Sunday.

South Korea and its allies have been expecting some sort of North Korean missile launch during weeks of heightened hostility on the Korean peninsula.

“The military is closely watching the North’s latest preparations for a missile launch,” the source said.

The North moved two mid-range Musudan missiles in early April and placed seven mobile launchers in the same area, Yonhap said. A North Korean show of force could be staged to coincide with the anniversary of the founding of its army on April 25.

A South Korean Defence Ministry official said he could not confirm the news report and said there had been no sign of unusual activity in North Korea. North Korea fairly regularly test-fires short-range missiles in the sea off its east coast.

North Korea stepped up its defiance of U.N. Security Council resolutions in December when it launched a rocket that it said had put a scientific satellite into orbit. Critics said the launch was aimed at developing technology to deliver a nuclear warhead mounted on a long-range missile.

The North followed that in February with its third test of a nuclear weapon. That brought new U.N. sanctions which in turn led to a dramatic intensification of North Korea’s threats of nuclear strikes against South Korea and the United States.

The tension has eased over recent days with the North at least talking about dialogue in response to calls for talks from both the United States and South Korea.

On Saturday, North Korea reiterated that it would not give up its nuclear weapons, rejecting a U.S. condition for talks although it said it was willing to discuss disarmament.