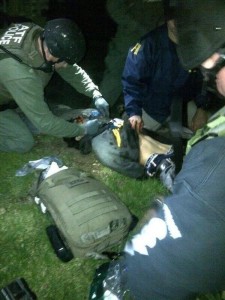 The 19-year-old suspect in the Boston Marathon bombings, who was seriously wounded and unable to speak, is awake and responding in writing to questions from authorities, according to a Tweets by ABC and NBC news networks.

Dzhokhar Tsarnaev, who is in the intensive care unit of Beth Israel Deaconess Medical Center, is responding sporadically, the ABC news network reported on its Twitter feed.
NBC’s Pete Williams is also reporting Tsarnaev is writing answers to questions from law enforcement.

Tsarnaev is being treated for a gunshot in the mouth that exited the back of his neck, according Boston Police Commissioner Ed Davis, who was interviewed on CBS’ “60 Minutes.”

He also suffered a gunshot wound to the leg, Davis said.