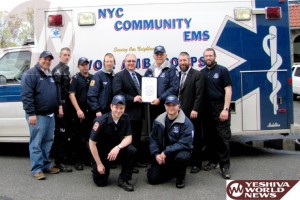 Assemblyman Steven Cymbrowitz (D-Brooklyn) honored a year-old Midwood-based volunteer ambulance corps that went above and beyond the call of duty during Superstorm Sandy.

Established in June 2012, the NYC Community EMS Volunteer Ambulance Corp. (CEMSVAC), under the leadership of Chief Operating Officer Ezra Max, was put to the test during Sandy, according to Assemblyman Cymbrowitz.

“The group dispatched between 40 and 50 volunteers all over southern Brooklyn to rescue residents and fellow first responders whose lives were in danger,” he said in presenting the corps with an Assembly citation. “Our community needed all the help it could get during Superstorm Sandy, and CEMSVAC selflessly put the needs of others above their own and served as a reassuring presence during a difficult time.”

“We not only want to save lives,” said Max, “but also encourage people to get involved in careers in EMS. During a time when people are very ‘me me me’, we are trying to do the opposite — we are trying to bring people together to be selfless and help other human beings.”