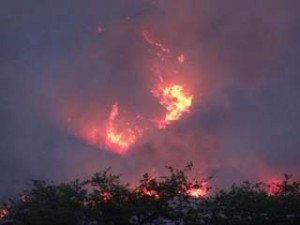 The wildfire was likely caused by a lightning strike Saturday night.

The Yarnell Hill fire, about 35 miles southwest of Prescott, has burned about 1,300 acres and forced the evacuation of 50 homes.

The fire started Friday and has not yet burned down any structures, but Sunday night firefighters pushed the blaze back away from communities, hoping to keep the blaze from overtaking any homes.

A growing fire in Yarnell forced about 600 residents from their homes.

Wendy Carter was one of those evacuated.

“My daughter came home this morning at 8 o’clock and said, ‘Start packing,’ and between my four grandkids and pets, we’re stressing,” said Carter.

The fire has burned about 1,300 acres in the community, 85 miles northwest of Phoenix.

The blaze, likely caused by lightning, is moving at about a half mile per hour up a hill, getting dangerously close to homes.

Officials ordered immediate evacuations for the communities of Model Creek, Double A Bar Ranch and the Buckhorn subdivision.

“You could see it coming closer and closer and every time the wind would shift, it would start up another Part of it burning,” said Carter. “I was scared, I was scared for animals and grandkids. I just knew we had to get out of there.”

The Sheriff’s office has sent out a reverse 911 call and officers went door-to-door to alert residents of the evacuation order.